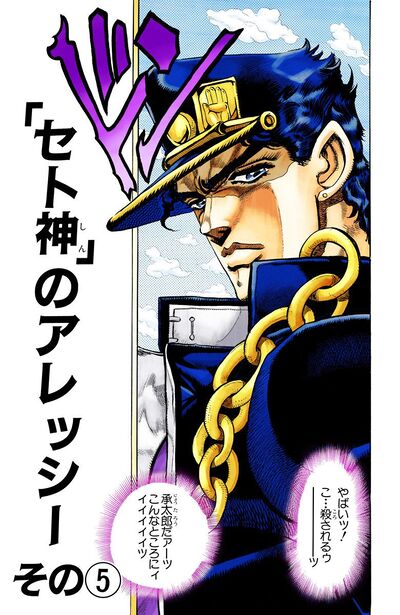 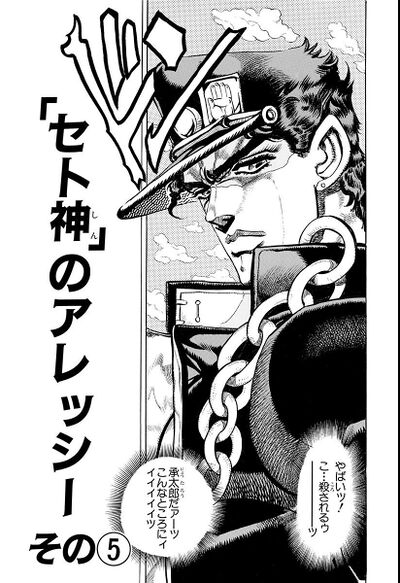 "Sethan" Alessi, Part 5 (「セト神」のアレッシー その⑤, 'Seto-shin' no Aresshī Sono 5), originally Jotaro as a Child (子供の承太郎, Kodomo no Jōtarō) in the WSJ release, is the ninety-sixth chapter of Stardust Crusaders and the two hundred ninth chapter of the JoJo's Bizarre Adventure manga.

In the street lays the injured Alessi, who after escaping from child Polnareff has now come face to face with Jotaro. Jotaro states that he finds Alessi's jump through the window to be rather unusual, and wonders if he is the cause for his missing friend. Alessi plays dumb, stating that he merely tripped out of the window while cleaning it. However in the window appears Polnareff shouting at Alessi. This distracts Jotaro, allowing Alessi to use his Sethan on him. Jotaro jumps back, but he is not quick enough and becomes a child. Due to only recently acquiring Star Platinum, Jotaro has lost the ability to use his Stand. Now a defenseless child, Alessi uses his axe to strike at Jotaro. However, despite being a seven-year-old, Jotaro is still able to fight and punches Alessi in the face. He then proceeds to perform his iconic punch flurry, knocking back Alessi. Alessi falls on his head and loses consciousness. When he awakens, he is greeted by an angry, now adult-sized, Polnareff and Jotaro. The two combine their Stands to unleash an intense beatdown, punching Alessi into oblivion.

Malèna, who also reverted to her original form, wakes up naked with a towel. After finding Polnareff's earring, she remembers the brave child who saved her, and begins looking for him. She eventually runs out into the street where she finds Polnareff, but she doesn't recognize him. Deciding it would be best not to get her involved with the danger of Stands, Polnareff tells her they never met and walks away. Malèna notices that Polnareff is wearing the other earring, but Polnareff insists that they never met. Polnareff and Jotaro meet up with Avdol and Joseph and the group continues their journey.