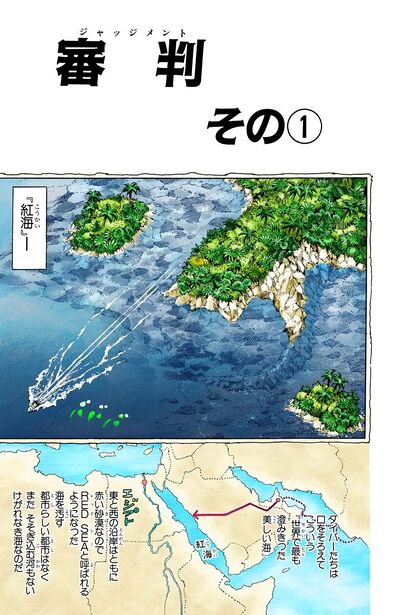 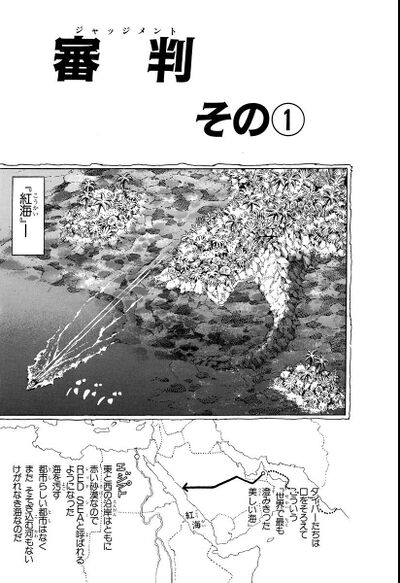 Judgement, Part 1 ( その①, Jajjimento Sono 1), originally The Magic Lamp (魔法のランプ, Mahō no Ranpu) in the WSJ release, is the sixty-first chapter of Stardust Crusaders and the one hundred seventy-fourth chapter of the JoJo's Bizarre Adventure manga.

The Joestar group begins to cross the Red Sea, the final stretch before Egypt. Jotaro says that they're heading in the wrong direction, and that the boat is going towards a small island. Joseph says that they need to meet someone there who is very important to their journey, but does not reveal who it is. When they get off of the boat, Joseph sees someone peeking at them, who then runs away. The group follows the man, and recognize him as Avdol. Joseph says that he isn't Avdol, but his father. Joseph has come to the island to inform him about Avdol's death. Joseph says that Avdol's father is a Stand user, but he does not know the nature of his Stand. Polnareff goes for a walk on the beach, and feels guilty about getting Avdol killed in his attempt to avenge his sister. Polnareff then stumbles upon a lamp that washed up on the beach and rubs it, releasing a genie from it. It asks Polnareff for his three wishes.