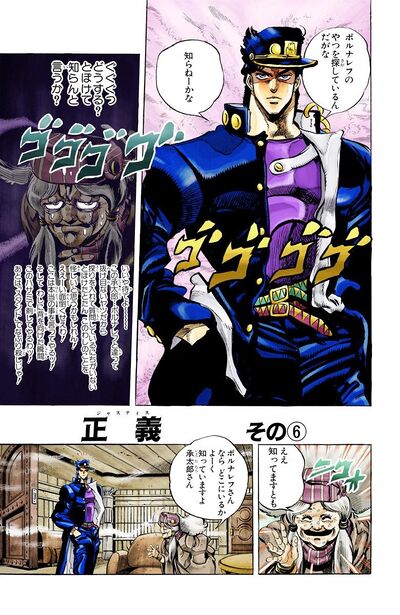 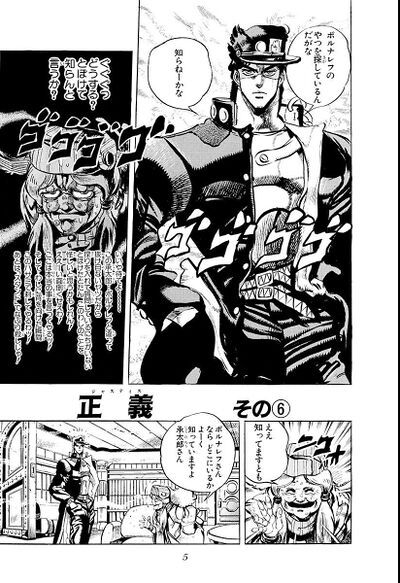 Justice, Part 6 ( その⑥, Jasutisu Sono 6), originally Just One More Breath (あと一回の呼吸, Ato Ikkai no Kokyū) in the WSJ release, is the forty-sixth chapter of Stardust Crusaders and the one hundred fifty-ninth chapter of the JoJo's Bizarre Adventure manga.

Jotaro tells Enya that he is searching for Polnareff. She tells him that Mr. Jotaro just needs to follow her, but, as he turns his back, she grabs her scissors and jumps at him. He bumps her feet and plays dumb, telling her that it is dangerous to run around with scissors in your hands. Jotaro asks Enya how she knew his name was Jotaro, to which she responds that all the guests signed their names in the guest book of the hotel. Grabbing the book, Jotaro shows her he signed his name as "Qtaro Kujo", because he was suspicious of her since she called Joseph by his name before they were introduced. He challenges her to show her Stand, and Enya makes all the corpses controlled by Justice burst out of the bathroom to attack him. Jotaro simply pummels all of them with Star Platinum, but misses one corpse; a baby held by the woman with boils on her face. The baby stabs Jotaro's leg with its tongue, and then Hol Horse explains to Jotaro how Justice works.

Star Platinum tries to punch Justice, but Enya just laughs at his attempt to punch fog. Still calm, Jotaro challenges Enya to take another breath, but she fails to do so and faints, because Star Platinum just inhaled Justice, suffocating it and its user.

With the battle over, Polnareff asks Joseph for medicine because he licked a dirty toilet and his tongue might get infected. Joseph just laughs at him. As the group leaves the hotel, they notice the entire town has turned into a cemetery.

Author's Note
“
I went swimming for the first time in a while, and I felt too nauseous to keep going. I'm not young anymore... am I?
”
—Hirohiko Araki
“
久しぶりに泳ぎに行ったら、がんばりすぎて吐気がした。もう若くないのか…な？
”
—Hirohiko Araki