The Miasma of the Void, Vanilla Ice, Part 7 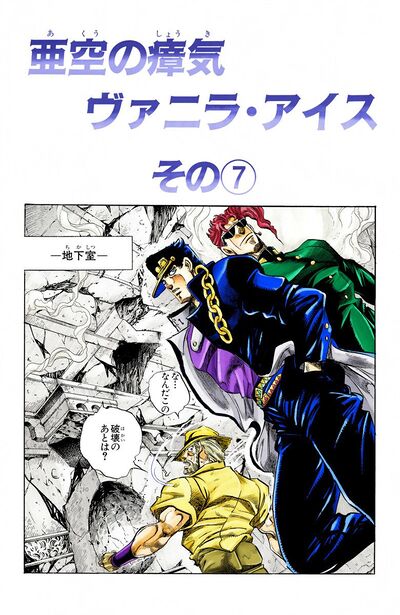 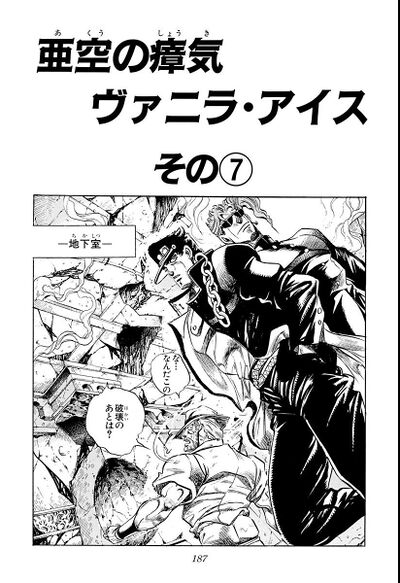 The Miasma of the Void, Vanilla Ice, Part 7 (亜空の瘴気 ヴァニラ・アイス その⑦, Akū no Shōki Vanira Aisu Sono 7), originally The Answer is Number Three (答えは③, Kotae wa 3) in the WSJ release, is the one hundred thirty-first chapter of Stardust Crusaders and the two hundred forty-fourth chapter of the JoJo's Bizarre Adventure manga.

In another part of DIO's mansion, Jotaro, Kakyoin, and Joseph observe the damage caused by Cream and Silver Chariot. The group decides to head further into the mansion in hopes of reuniting with Polnareff and Avdol. On the second floor, Polnareff continues his fight with Vanilla Ice. Within his void, Vanilla Ice circles around Polnareff and Iggy getting closer to the center with each rotation. Polnareff racks his brain to find a way to dodge Vanilla Ice's attack. He comes up with three options:

1.) The handsome Polnareff will come up with an idea to counter his attack.

2.) The others will come save Polnareff.

Believing option two to be unlikely, Polnareff decides upon option one. Silver Chariot goes outside of Cream's path and grabs Polnareff. The Stand pulls its user across the path but isn't fast enough. Polnareff draws back, resulting in only losing part of his arm. Back in the center, Polnareff realizes the answer is option three. Despite his fatal wounds, the dying Iggy appears outside Cream's path with The Fool, weakened, but ready to fight. Polnareff warns him that using his Stand will deepen his wound and kill him. Polnareff yells to not save him, regretting being saved all the time and causing Avdol to die. As Cream finally approaches Polnareff, Polnareff gives up and says farewell to Iggy. He appears to be erased by Cream. Vanilla Ice reappears from the void, believing he has won. However, Vanilla Ice looks up and sees Polnareff on the ceiling being held up by The Fool. At that moment, Iggy dies, dropping Polnareff. Polnareff cries Iggy's name as he stabs Ice in the forehead.