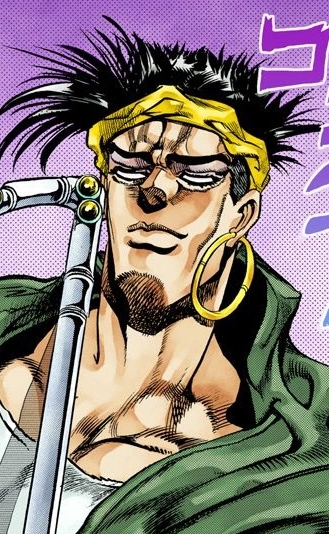 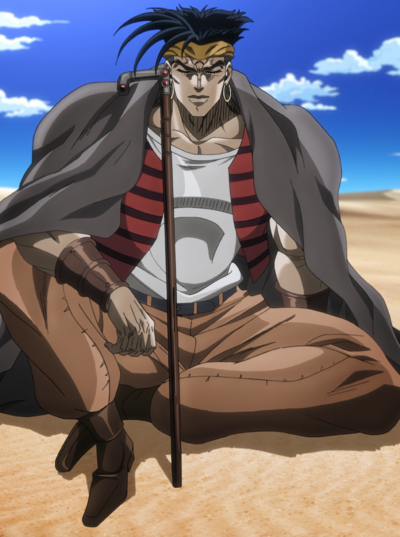 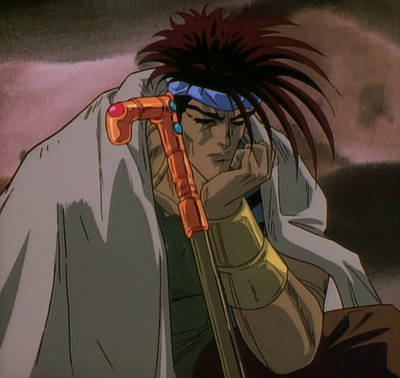 As a loyal assassin for DIO and the User of the Stand Geb, he is the first of the Egypt 9 Glory Gods the Crusaders encounter upon entering Egypt, relentlessly battling them without fear.

N'Doul is a blind athletic man of medium height, with dark unkempt hair and blank eyes that are always nearly shut due to his condition. N'Doul dons a simple attire consisting of a striped vest ontop of a sleevless shirt, armbands, pants, shoes and a drape to protect himself from the sun in the Sahara. He also wears a headband and two hoop earrings.

N'Doul carries a cane, segmented and decorated with 3 jewels on the handle.

“
Star Platinum is said to be the most powerful Stand. Once I kill Jotaro, Master DIO is going to be happy... For DIO, I will defeat Jotaro using my whole mind and soul.
”
—N'Doul, Chapter 186: "The Fool" Iggy and "Geb" N'Doul, Part 4

N'Doul's strongest trait is his loyalty to DIO and determined focus to carry out his will. He battles the Crusaders relentlessly and even goes as far as to fatally injure himself to escape questioning. N'doul fanatically idolizes DIO fully knowing his evil, stating that people like him deserve a savior.

Despite his ferocity, N'Doul keeps a cool head and found joy in his battle against the Crusaders, often giggling whenever he was at the advantage. He is confident in his ability as a Stand user, referring to himself as the "the great N'Doul", but not without good reason. N'Doul is a very competent fighter and strategically combats the Crusaders from a distance. He analyzes problems and needs to attentively watch the enemy's movement due to his condition. His overconfidence becomes a weakness, with his stand being nearly lured in the open by Avdol, a move which he praised. He shows respect when outsmarted, and willingly revealed information to Jotaro after his defeat.

N'Doul's character is based on the Zatoichi movies' eponymous character. Hirohiko Araki thinks that Zatoichi is just a "scary guy, rather than the hero".[4] Also, N'Doul's outfit design might have been inspired from Antonio Lopez's Tales from the 1001 Nights. 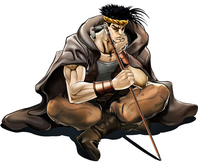 As N'Doul is blind, he cannot lock onto opponents. He also doesn't possess any particularly powerful combo attacks, and his Normal attack combo involves the use of his cane for a 2-hit melee attack that knocks opponents down in order to give him time to create distance. He cannot move faster than a slow walk, and does not have any air attacks that would also help boost jumping distance, making platforming difficult. N'Doul also does not possess any sort of Homing Dash, further limiting his already-slow mobility, but can still expend stamina to dodge forward like all other characters. In place of a Homing Dash, however, N'Doul sends Geb forwards in the direction he's facing, up to four times. Doing this will allow skills to then be performed wherever Geb is. 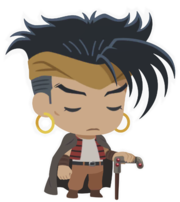 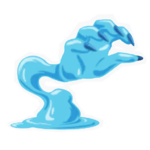