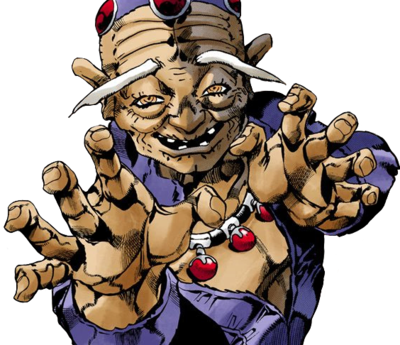 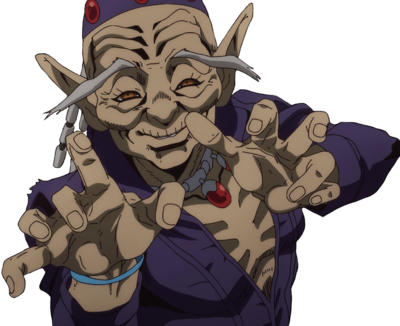 SO Episode 15
“
You there! Do you want to drown too? (あんたも溺れてみるか？Anta mo oborete miru ka?)
”
—Kenzou

Kenzou is an elderly inmate at Green Dolphin Street Prison, and the former guru of a sect. He is sent to assassinate Jolyne Cujoh in the Ultra Security House Unit. He eventually battles Foo Fighters instead when she comes to save Jolyne. Kenzou is a Stand User, and wields Dragon's Dream.

As part of his occupation as a martial artist, Kenzou is often seen adopting different stances resembling those that of a martial artist, for instance baring his hand at the enemy with the fingers contracted reminiscent of the Tiger Claw style of kung-fu. 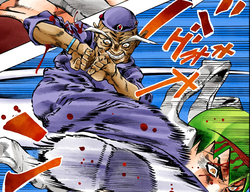 He's also a formidable hand-to-hand fighter. For instance, when F.F. attempts a knifehand strike, Kenzou identifies the blow immediately and counters it with his arm before effortlessly transitioning into a nearly fatal strike to the mouth.[10] Kenzou has a special technique: by plunging his hand in the opponent's mouth, he can damage the 4th vertebrae of the cervical spine and affect the adrenal glands, causing an excessive release of mucus in the respiratory system. In practice, it means that he can drown his opponents in their own mucus in one good strike.[11]

Kenzou is sent to the Ultra Security House Unit alongside D an G, Viviano Westwood and Guccio to assassinate Jolyne Cujoh. After Westwood loses control and frees all the inmates, Kenzou makes short work of most of the inmates and drowns them. He confronts a battered Jolyne but detects Foo Fighters and attacks her first by kicking the corpse she is is hiding inside of. F.F. comes out and shoots Kenzou, but the corpse's leg twitches, protecting the old man.

Kenzou and Foo Fighters properly engage each other. He summons Dragon's Dream and reads the lucky spot. Thanks to that, he avoids F.F.'s shots and drives his fist inside of her throat, using a specific technique to trigger a secretion of mucus from the adrenal gland that is supposed to make his targets drown by themselves. He then turns to face Jolyne but F.F. surprisingly pierces her own throat and shoots again. Kenzou barely manages to be avoid the attack and kicks F.F. but she simply squeezes between the bars of a handrail to escape. Seeing inside of F.F., Kenzou is intrigued by the unique flow in her body but remains confident as she retains the same weak points as a human.

He reads the lucky spot again and summons Dragon's Dream, who is seen by F.F. and irritatingly explains to F.F. the ins and outs of its ability for the sake of a fair fight. After an exchange of blows, Kenzou reaches Dragon's Dream and his arm connects with F.F.'s unlucky spot. Although F.F. blocks the fist by dislocating her elbow, a series of events causes pieces of glass to pierce F.F.'s face. She opens her mouth in shock, allowing Kenzou to attack although F.F. backs off to avoid the attack. Dragon's Dream points to another unlucky spot above F.F.'s left ear. Kenzou rushes towards F.F., who attempts a kick but Kenzou then grabs the leg. When F.F. attempts a knifehand strike, Kenzou makes a straight spearhand strike at F.F.'s throat and jams his other hand in F.F.'s throat. In retaliation, F.F. bites Kenzou's fingers. In pain, the old man strikes F.F.'s liver and pushes her towards Dragon's Dream. F.F.'s arm enters the dragon and punches a corpse, which causes another unlucky series of events that make a piece of machinery slice through F.F.'s head. F.F. is now dangerously low on water.

F.F. shoots Kenzou, who is barely out of his safe spot and manages to hurt him. However, the attack is not enough. F.F. thus plans to trick Kenzou into misreading Dragon's Dream with a mirror made of water but desperately needs it to sustain herself. Kenzou begins to rant about the hell his life has been since his arrest and orders Dragon's Dream to show him the way to make his final attack. F.F. runs towards the fire extinguishing hose the guards used, pursued by Kenzou. F.F. searches for the faucet, only for Dragon's Dream to appear and warn F.F. not to touch it as Kenzou attacks. F.F. decides to intentionally put her arms in Dragon's Dream while Kenzou performs a sweeping kick on her head.

F.F. manages to sneak into the hose through a tear made after Kenzou's kick and break the faucet open, but her earlier action prevents her from touching the water since her own arms attack it. F.F. is thrown down to the execution room and the hose activates the execution sequence on the electric chair there. By pure misfortune, F.F. finds herself unable to get away from the chair. Kenzou arrives and F.F. narrowly misses him with her shot again, but this time, F.F.'s shots break Kenzou's jewelry and she steps on two pearls that make her trip and fall back onto the electric chair. Desperate, F.F. attempts to kick Kenzou but the old man blocks the attack and kicks F.F. in place as the electric chair starts up.

F.F. is being electrocuted but Dragon's Dream reveals that she was able to collect the sweat from Kenzou after his effort. Kenzou realizes he's in an unsafe spot and is grabbed by F.F., who share the electrocution with the old man. Kenzou barely survives it and Jolyne approaches to finish him off despite her own injuries. However, Kenzou manages to avoid the attack and himself stands up to kill Jolyne. He tries to jam his foot in Jolyne's throat but Narciso Anasui intervenes. With Diver Down, Anasui turns Kenzou's legs into springs, preventing him from reaching his lucky spots again. Unable to stop bouncing around, Kenzou lands in a bucket and is defeated for good.