From JoJo's Bizarre Encyclopedia - JoJo Wiki
(Redirected from Feng Shui)
Jump to navigation Jump to search
English
français
русский
português do Brasil
“
"The sequence" - the magnificence of music resides within the chord progression. Even Mozart once said to the Emperor that no note could be omitted from a piece. The human body is also made of a genetic sequence called DNA. Thus we cannot neglect the existence of that sequence of preestablished facts we call fate. But if everything is decided in advance by fate, we tend to think that the efforts we deploy everyday are vain. This is one of the points I have to consider when I tell a human epic. Is there a solution to that question?
”
—Hirohiko Araki, Volume 63 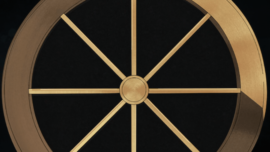 The "Wheel of Fate" as depicted in GW Episode 20

Fate is evidenced throughout the series as events that are predetermined to happen. While many obscure examples are littered throughout, several concrete ones remain. Most notably is the Stand Tohth, which allows its user to see small examples of things fated to happen in the near future. As Tohth's user, Boingo explains several times, whatever is predicted in the book will happen and cannot be changed. The way it will occur might change, depending on events that transpire beforehand, yet the outcome will always be the same.

Other characters in the series, most notably Diavolo, swear themselves to fate - believing it guides their lives and completely controls the actions of all living things. Fortune tellers also hold credence in the series, as Wang Chan correctly prophesied that the three moles on Dio Brando's ear branded him by fate itself and that he would not die a human being. In addition, the Ripple master Tonpetty could through some means foresee the future of those whose hands he touched. Tonpetty's prophecy of Will Anthonio Zeppeli's death at the hands of Tarkus, decades before it would happen also proved to be absolutely correct; however, it was also predicted that Zeppeli could have escaped his fate had he chosen to abandon his quest for the Stone Mask. Also, in a prophecy about the Red Stone of Aja, it was said that the stone would be instrumental to stopping the Pillar Men as well as creating the Ultimate Thing. This would indeed prove correct, as Joseph Joestar would later use the stone to reflect the Ripple attack used by Kars, which would ultimately seal his fate.

A recurring concept within the series is the belief that fate has the ability to cast judgement, and acts in the favor of justice, and that inherent moral standards supersede all other forms of fate. While killing Enrico Pucci, Emporio Alnino argues against the priest’s fatalistic ideology by invoking this concept, using the term “true fate” to describe “walking the path of justice.” [1] Similar views are espoused by Hayato Kawajiri, who tells Yoshikage Kira that any luck or fate on his side would be overcome by the righteous spirits who oppose him,[2] and by Giorno Giovanna, who states that righteous actions are born from reality, and that the will behind these actions will survive.[3] Giorno’s sentient Stand, Gold Experience Requiem, tells his adversary Diavolo that although his vision of killing Giorno with his own stand is an accurate premonition of reality, that reality will never be realized due to Requiem’s power,[4] reinforcing the concept that lesser forms of fate are superseded by fate’s preference of righteous actions over evil. 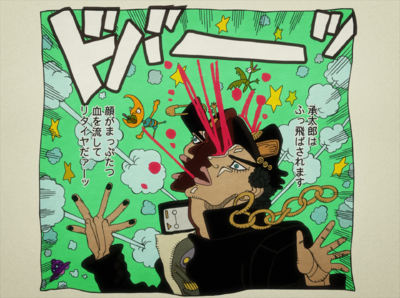 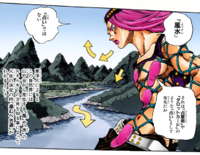 Feng Shui (風水, Fūsui) is a mysterious force featured in Stone Ocean defined as a "path that needs to be taken". In other words, it employs "lucky" and "unlucky spots".

The "lucky spots" are certain areas that are protected from misfortune. Even if a force that is supposed to harm an individual comes directly towards them, the individual in question wouldn't be harmed as long as they're in a safe zone. Such an example would be Kenzou, before developing Dragon's Dream, having survived a building collapse from inside; he unknowingly stood in a safe zone, and the debris ended up crashing down around him.[6] Another example is when Foo Fighters tried shooting Kenzou, but the bullets seemed to go around him.[7] Inversely, the "unlucky spots" define certain areas where individuals who step in one will face misfortune no matter the circumstances. 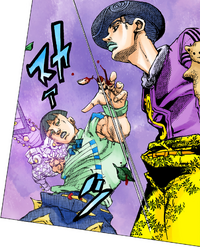 A regular leaf slicing off Joshu's fingers
“
The right path... Even if walked on by a saint who makes no mistakes... It is unavoidable that bad things will sometime occur. That is "calamity".
”
—Toru, JJL Chapter 98: The Wonder of You, Part 15

Calamity (厄災, Yakusai) is a concept featured in JoJolion. It is an unavoidable, negative force of energy defined as a series of bad things that are bound to happen to someone, even if they haven't made any mistakes.[8] Calamities can bring out grievous misfortunes, whether unnatural or not. For instance, rain drops piercing Josuke and giving him near-lethal wounds[9] or a falling leaf slicing off Joshu's fingers.[10]

The only known force capable of bypassing the laws of calamity are things that "don't exist", such as Go Beyond.[11]