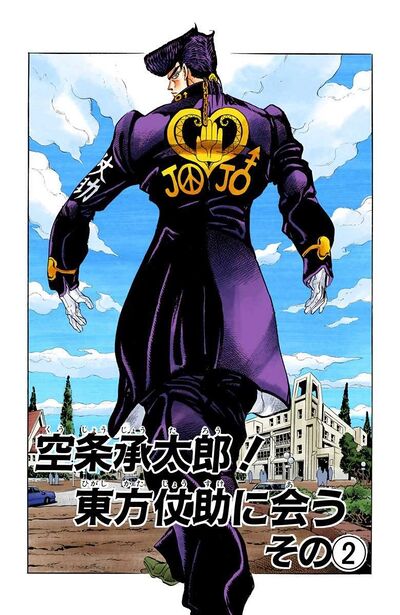 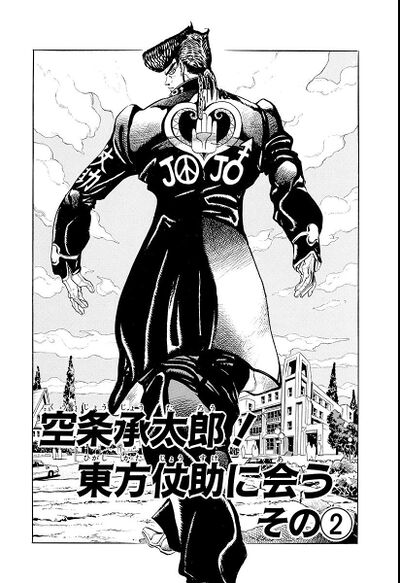 Jotaro reveals some knowledge of Josuke's life such as his mother's background, his birth date, and the 50-day fever that afflicted 4-year-old Josuke in 1987. He then reveals that Josuke's absent father is Joseph Joestar. He introduces himself as Josuke's much older nephew and explains his business in Morioh: linking Josuke to Joseph's inheritance. Jotaro is surprised by Josuke's modesty and composure at this news.

As a group of Josuke's female admirers arrive and greet Josuke while he is talking to Jotaro, the latter attempt to gain back his attention. Jotaro unknowingly enrages Josuke by making an off-hand remark about his hairstyle, prompting Josuke to use his mysterious Stand power to attack Jotaro in retaliation. Jotaro counters Josuke; providing Josuke his first evidence of Stands other than his own, though this does not interest him in his angry state. After an exchange of punches, Jotaro is shocked to discover that Josuke's Stand appears to be as fast and powerful as his own Stand, forcing him to stop time to end the fight after Josuke breaks Star Platinum's guard (he says, for the first time since fighting DIO, 10 years ago).