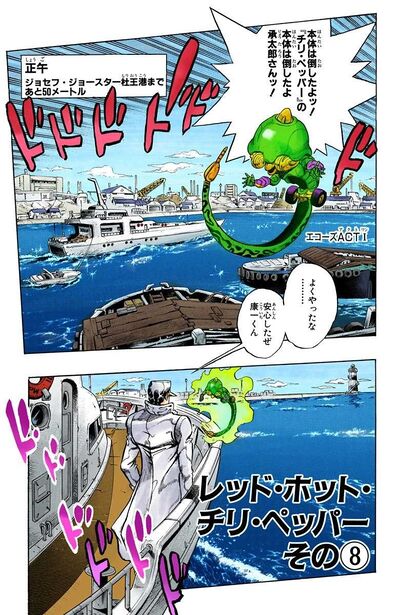 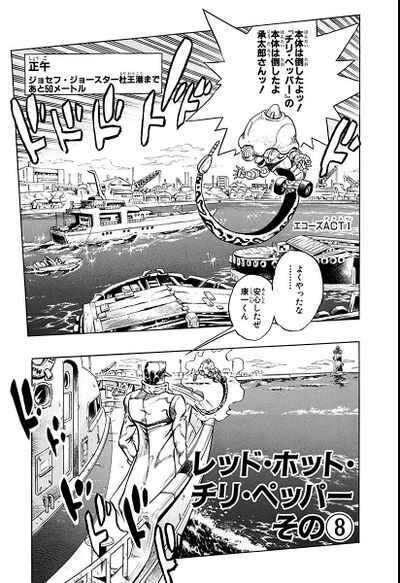 Joseph's boat has arrived within 50 meters of Morioh's port and Koichi informs Jotaro of Otoishi's defeat through Echoes. In Joseph's cabin, Okuyasu guards the old man and has difficulties conversing with him due to Joseph's deafness. Joseph is eager to meet his son, but when he asks Okuyasu what Josuke thinks of him, Okuyasu answers that they don't talk about him which saddens him. A Speedwagon Foundation employee comes to take Joseph's baggage. Josuke says that he is not thrilled to meet his father and apprehend the awkwardness of the meeting. However, Koichi cuts short the conversation when he notices that Otoishi has disappeared. When Echoes warns Jotaro, the latter looks around and sees Otoishi's clothes. Another Speedwagon Foundation employee barges into Joseph's cabin to announce the danger but looks at the previous employee, who was, in fact, Otoishi in disguise. On the verge of being discovered, Otoishi takes the initiative and accuses the other Speedwagon Foundation employee of being the impostor. Okuyasu prepares to punch the genuine employee but the latter says that he wouldn't have warned Joseph of the impostor if he was the impostor, confusing Okuyasu. Soon Okuyasu, who always relied on his brother to make decisions, is totally flabbergasted and sees Red Hot Chili Pepper sneaking behind Joseph for the kill. He suddenly announces that he knows the enemy's identity and punches Otoishi which also disables Red Hot Chili Pepper and breaks Joseph's cane when Otoishi falls on it. Confused, Otoishi asks how Okuyasu guessed right, only for him to say that he planned to punch both anyway and just got lucky.

Joseph and Josuke finally meet and the moment is tense until Joseph trips and Josuke catches him. Joseph complains that his cane is broken thus Josuke tells him to simply hold onto his hand. Okuyasu has the idea of using Crazy Diamond to fix the cane, but Koichi stops him, moved to see the father and son walking away together.