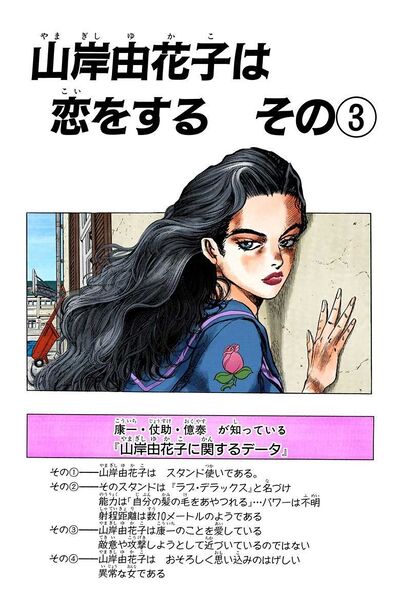 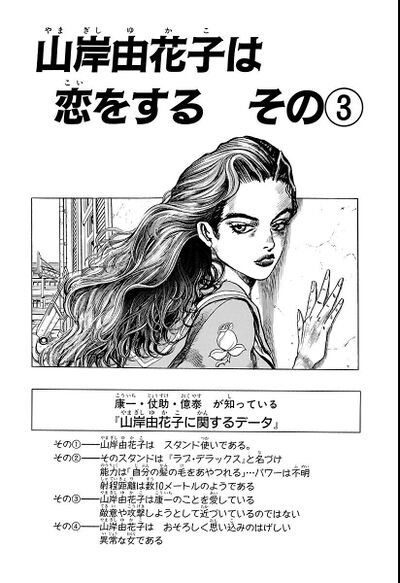 Koichi, Josuke, and Okuyasu meet near the swimming pool. Koichi is confused as to what he has to do with Yukako, saying that it still pleased him a little when she confessed to him. Okuyasu tells Koichi that he, "feels him, feels him deeply and his feelings he can feel deeply." Koichi decides to bluntly tell her off, but Josuke objects at the idea, arguing that it will have the reverse effect and only make her more determined. In order not to antagonize Yukako, Josuke proposes to ruin his image, so that she leaves him by her own accord. Between choosing either looking like a momma's boy or a filthy boy without hygiene, he picks the second choice. Josuke and Okuyasu then go overboard with their ideas, proposing that Koichi shoplifts or pretends to be gay, which Koichi refuses as with his current grades, he risks ruining his life. Nonetheless, the three promise to try to and disgust Yukako away from Koichi.

Later Josuke and Okuyasu openly slander Koichi as Yukako passes, who stays emotionless but listens to them anyway. They talk about how Koichi really steals, he cheats at the exams, and how he doesn't have any future.

That night, Koichi has trouble sleeping because he is anxious about Yukako. When he finally falls asleep he has a nightmare of her coming toward him. He suddenly wakes up and sees Yukako at his window, and tying him with her Love Deluxe, she enters Koichi's room, telling him that she's decided to make him a better man. She looks around his room and, seeing Koichi's 16 out of 100 in an English assignment, kidnaps a powerless Koichi who understands that Josuke has made things worse.