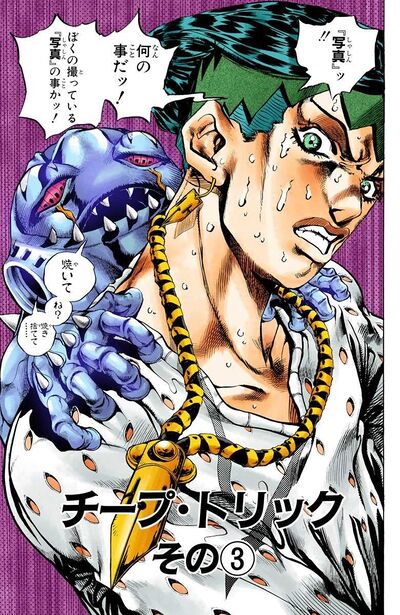 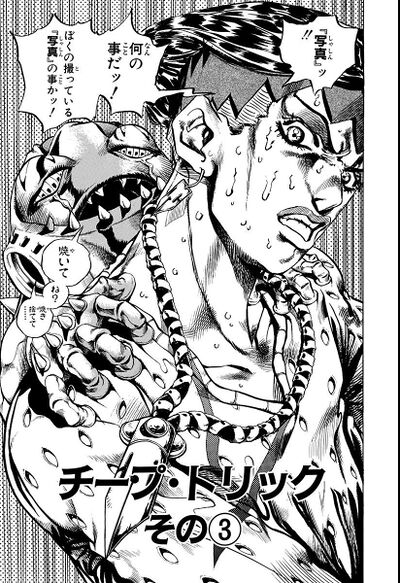 Cheap Trick, Part 3 (チープ・トリック その③, Chīpu Torikku Sono 3), originally Burn the Photos! (写真を焼こう！, Shashin o Yako u!) in the WSJ release, is the one hundred forty-ninth chapter of Diamond is Unbreakable and the four hundred fourteenth chapter of the JoJo's Bizarre Adventure manga.

Rohan finds himself in a tight spot as Cheap Trick is now bound to his back. Cheap Trick keeps telling him to burn the photos, but Rohan refuses, eventually managing to reach it with Heaven's Door. Rohan himself is transformed into a book because he is now technically Cheap Trick's user. This also explains that Masazo wasn't strong-willed enough to fully materialize a Stand and control it and that its only power is to talk.

Rohan struggles, trying to take it off him, but doesn't succeed. After seeing a passerby talking with him, Rohan realizes that he cannot let his back be seen and hides in his house, calling Koichi for help. When Koichi arrives, he sees Rohan sitting in a corner, his back turned away.

However, Rohan's explanation plus Cheap Trick's invisibility to him, along with the desiccated corpse of Masazo which resembles a doll more than anything, leads Koichi to mistake Rohan's plight for a prank, and leaves. Despite his straits, Rohan promises himself to get back at Cheap Trick.