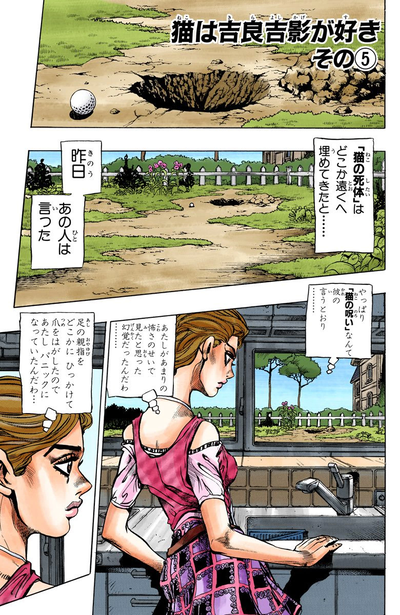 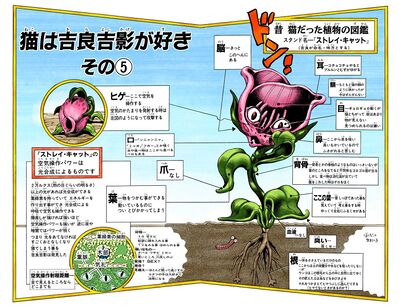 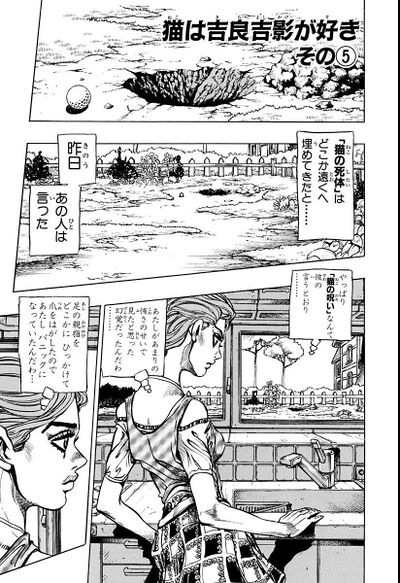 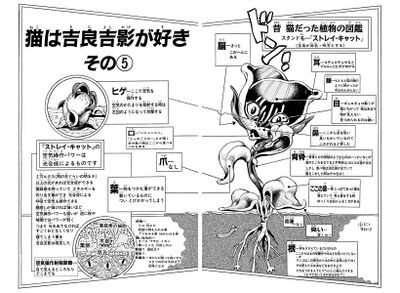 Shinobu looks out her window and figures her husband was right about there being no curse. She assumes she must have imagined everything and got her toenail caught on something without noticing, which peeled it off.

There is an in-depth biography of Stray Cat with details of its anatomy and physiological functions. Back inside the house, Shinobu continues reminiscing about what happened on the previous day, being the happiest she's ever been. She blushes about fainting in front of her husband and is glad that he stayed by her side until she recovered, instead of leaving for work.

As Kira eats his breakfast, he looks at his knife and sees the reflection of Hayato peeking from behind the door, glaring at Kira. Feeling unsettled, Kira glances back as he's confused at what Hayato wants, but Hayato disappears by the time Kira turns around. Shinobu calls Hayato rude for not saying anything and leaving.

Suspicious, Kira states that he wonders what Hayato's been doing alone in his room lately. Shinobu reveals that he's probably playing video games, and his grades haven't dropped so she tries not to worry. However, she doesn't understand him because he doesn't seem to mind not having any close friends.

Shinobu then points out that Kira is eating her food instead of his. She made one for him without shiitake mushrooms because the real Kosaku couldn't stand them, yet Kira was eating them anyway. Feeling extremely anxious due to his mistake, Kira starts sweating rapidly, but Shinobu simply mentions that she's glad that he likes it now.

As Kira leaves for work, Shinobu tries to give him a goodbye kiss, but he just walks out the door. Shinobu isn't disheartened though, and is instead even more motivated to reignite their marriage's passion. Hayato, who pretended to go to school, noticed his "dad" had shoes of two different sizes. Furthermore, his dad getting along with his mom, and not complaining about the shiitake mushrooms were odd behaviors that stood out to him as well.

Hayato watches the video he recorded of his dad's room from the night before and sees Kira writing Kosaku's name over and over. He also sees Kira taking a flower pot full of soil and a large bag of cat food to the walk-in closet. Hayato decides it's time to investigate.

Meanwhile, Kira is on his way to work and crosses paths with Kimura (a boy late for school) and other school kids who are wearing hats as part of their uniform. He realizes that Hayato's hat was left behind on the coat rack back home and comes to the conclusion that his "son" is up to something. Hayato enters the walk-in closet trying to find the flower pot, and then climbs up the attic. He then comes face to face with Stray Cat, who is sleeping in the pot. Menacingly, Kira made his way back to his house and enters through the front door, nervous that Hayato will find something.