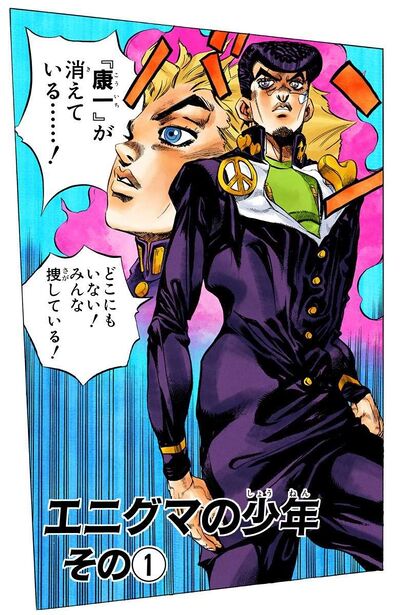 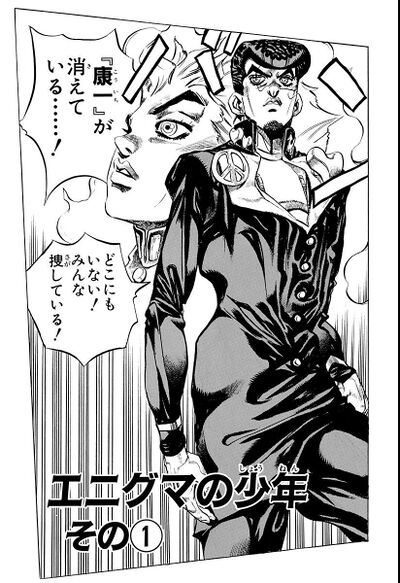 Enigma Boy, Part 1 (エニグマの少年 その①, Eniguma no Shōnen Sono 1), originally The Ability to Track Smell! (臭いの追跡能力！, Nioi no Tsuiseki Nōryoku!) in the WSJ release, is the one hundred thirty-ninth chapter of Diamond is Unbreakable and the four hundred fourth chapter of the JoJo's Bizarre Adventure manga.

After being told by Toyohiro that Koichi had been taken care of, Josuke and Okuyasu discover that Koichi has vanished. Assuming that a new enemy attacked him during his morning commute, Josuke goes to the hospital to seek out Yuya Fungami for help. While Yuya refuses to help out at first because of his pride, he realizes he would only be hurting himself by staying in the hospital longer. Thus, Josuke heals Yuya and he plans to use his superior sense of smell to see if he can find Koichi's scent. Yuya takes a moment to admire his beauty after getting dressed and his fangirls enter the room. While they're happy about Yuya being healed, they threaten Josuke before Yuya tells them that Josuke is cool now.

Josuke takes Yuya to where he found Koichi's schoolbag on the ground, two minutes away from his house. As Yuya sniffs the bag, he reaffirms that he's not there to fight and was only helping Josuke find Koichi. He then points out the guy standing behind Josuke as being the one covered in Koichi's scent. The man walks away after revealing himself, leading Josuke to chase after him. Once Josuke grabs the guy's coat, the guy disappears and Josuke's mom seemingly pops out of nowhere into his arms. Although Yuya and Josuke are confused as to how that happened in the blink of an eye, Yuya warns Josuke that the Stand user is still nearby.