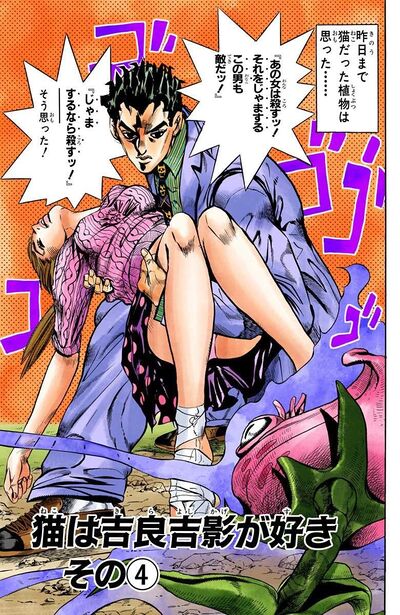 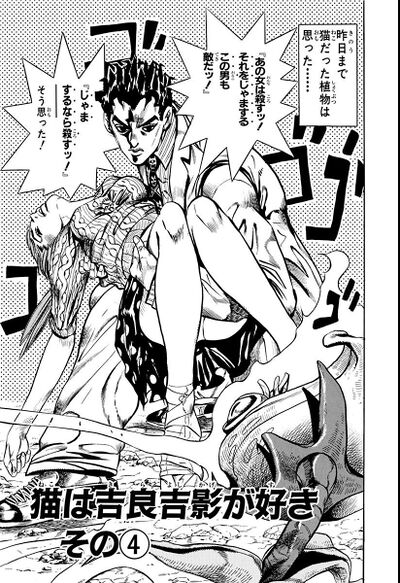 Kira discovers that Killer Queen's bomb had a delay before exploding because there was no air, and thus, the cat-plant must have an invisible ability to perfectly control air.

The cat-plant fires bubbles of compressed air at Kira, but Killer Queen blocks it. Killer Queen then attempts to stomp on the cat-plant, but it envelops itself inside an invisible air bubble which protects it. After shooting at Killer Queen's foot and making Kira stumble, it shoots at a cactus plant behind Kira. The cactus bursts open and pierces Kira and the unconscious Shinobu with its thorns.

Kira panics that Shinobu got hit, and then is stunned when he realizes that he was just worried about some woman. He backpedals by stating he was only relieved that her eyes weren't struck by the thorns because if something happens to her then it would be easier for Jotaro to discover his identity.

Stray Cat fires more compressed air bubbles but Killer Queen blocks it. Kira says the attack is nothing against his Stand now. However, the cat-plant simply grooms itself while Kira realizes that its attack got air inside the blood vessels of his forearm. The air progresses up Kira's arm and moves toward his heart, as Kira recalls what he learned while studying Health and Fitness. If more than about 10cc of air is injected into the bloodstream, it causes an embolism and his lungs will be fatally blocked. Stray Cat's attack was much greater than 10cc, worrying Kira even more.

Kira attempts to press on his vein with his finger, but he can't exert enough pressure to block the airflow. As it almost reaches his torso, he has no choice but to thrust Killer Queen's fingers into his vein, causing a miniature explosion that shoots the air out of his arm. Stray Cat prepares to attack him again, but Kira is at a loss of how he could defeat it. Just then, he spots a golf ball on the ground and rolls it over to the cat-plant. Stray Cat notices the ball and has fun rolling it around with its leaves. Thus, Kira is saved for now as the cat is distracted from its grudge.

Author's Note
“
For some reason, my feet stink much worse in the Winter than they do in the Summer? Why!? This is my final question for the year.
”
—Hirohiko Araki
“
冬になると、夏に比べて何故か足の臭いが気になる…。何故だ！？今年最後の疑問である。
”
—Hirohiko Araki