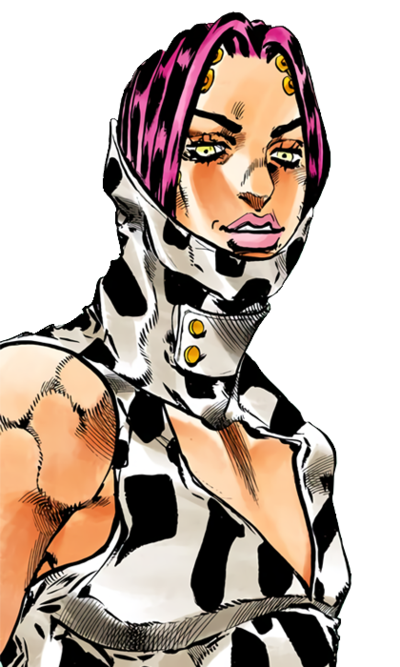 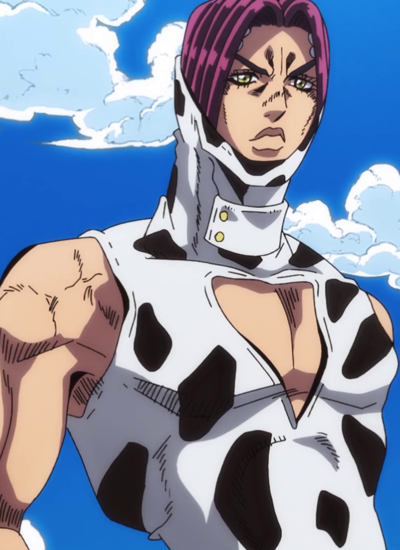 Rikiel is a young, decently built man with a long face. He has dark hair styled into several dreadlocks. He wears a sleeveless and hooded bodysuit patterned after the hide of a stereotypical cow with an opening on his chest, similarly to the suit of his brother, Giorno Giovanna. He wears an assortment of arm warmers with the same cow hide pattern.

Along with his brothers, Rikiel inherits the Joestar birthmark from his father.

Rikiel is initially a meek youth distraught by the numerous afflictions he suffers from, causing him to have no hope for his future and a damaged spirit.[2] He spent his life disturbed by an unknown affliction with seemingly random symptoms: his eye-lids would close, it'd become hard to breath and he'd start panicking as a result. Rikiel is riddled with anxiety in his first encounter with Pucci, and immediately breaks down infront of the Priest.[3]

When Pucci unlocks his Stand Sky High, Rikiel becomes more confident and is seen evolving into an honorable and brave fighter during his fight with Jolyne.[4] He holds human progress in high esteem[5] and sees Apollo 11 as a symbol of human growth.[6] Rikiel is a man of honor and fights to repay his debt to Pucci, and when Jolyne defeats him, he congratulates her and reveals details about Pucci.[7] He inherited his father DIO's determination and hardcore actions as well as a rare trait of acknowledging a worthy opponent.

Fate pushed him into meeting the priest in Orlando when, after driving against the traffic and colliding with the dividing rail, he was brought to the hospital and crossed paths with Pucci. Rikiel learns from Pucci that he is a son of DIO. He begs Pucci to open his eyelid, which closes for no apparent reason. Rikiel then begins to lament his whole life, which was ruined by his lack of confidence and his strange illnesses. Pucci listens, then tells Rikiel to think of his lineage, stating that he has a purpose in life and uncovers his ability to control organisms named skyfishes, or rods. This allows Rikiel to regain control of his eye and a confident Rikiel leaves the hospital to attack the Joestar Group. A swarm of skyfishes rush toward Jolyne's first vertebrae, but Jolyne decides to set herself on fire, protecting the brain stem from the heat sucking rods. Stone Free lands a punch, sending Rikiel against his motorcycle, but also revealing Rikiel's Joestar Birthmark, to everyone's astonishment. Planning to interrogate Rikiel later, Jolyne runs forward to finish off the enemy, but Rikiel douses himself with gas, and sets himself on fire too. Out of sheer resolve, and determined to find a weakness, Rikiel stands in front of Jolyne as his body is burning. Rikiel's new condition allows him to see a new weakness, he sends his rods into Jolyne's mouth, targeting the hypothalamus near the inside of the upper jaw to disrupt the eye perception and cause afterimages. That way, he is able to induce hallucinations in Jolyne and avoids her attacks for a moment. However Jolyne decides to shut her mouth and simply stop breathing, trusting the mystic sense of the Joestar Family to detect Rikiel, and lands a kick. Jolyne, still on fire, has managed to strike Rikiel thanks to her determination. Stone Free violently pummels Rikiel but surprisingly, Rikiel catches Jolyne by her neck. Rikiel declares that he will be the most determined in this fight and severed his own nerves to not feel pain, meaning he won't fall until he dies; planning to finish with a draw and have both dying, Rikiel lashes out the skyfishes into Jolyne's neck, which is not in fire anymore. Jolyne continues to pummel Rikiel as the rods suck her body heat, and both collapse. The rods, without their master, now leave in the sky.