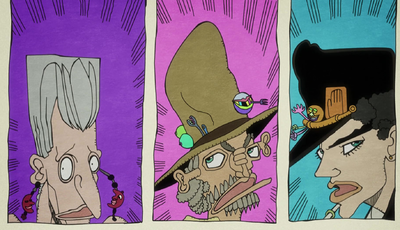 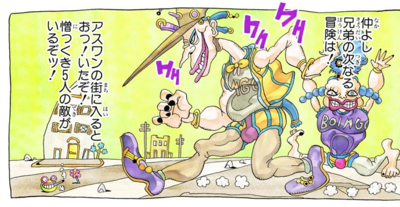 It narrates the misadventures of the Oingo Boingo Brothers as they try to assassinate the Joestar Group.

The Oingo Boingo brothers, two of DIO's Nine Egyptian Gods, plan to kill Jotaro's group stealthily using Boingo's Tohth, which can predict the future, and Oingo's Khnum enabling him to disguise himself. Boingo predicts that the group will drink poison, and Oingo disguises himself as a waiter in a café. The group drinks poisoned tea, but immediately spits it when they see Iggy causing mayhem, then leave the café.[1]

Boingo then predicts that Jotaro's head will be split by the explosion of a bomb, and Oingo tries to plant a bomb hidden in an orange inside the group's car.

From left to right: Oingo and Boingo
However, Joseph and Polnareff notice the suspicious figure near their car and ask who it is. Oingo reveals himself disguised as Jotaro; forced to ride with them, he becomes nervous and tries to get rid of the bomb, with no success. Oingo manages to leave the car without being suspected but Polnareff throws an orange away, which happens to be the bomb, and Oingo walks on it. The bomb explodes and Oingo's face, still looking like Jotaro's, is split in two. At the same time, Boingo is beaten up by the bodyguards of a man Oingo and Boingo robbed earlier. The Oingo Boingo brothers are defeated.[2]