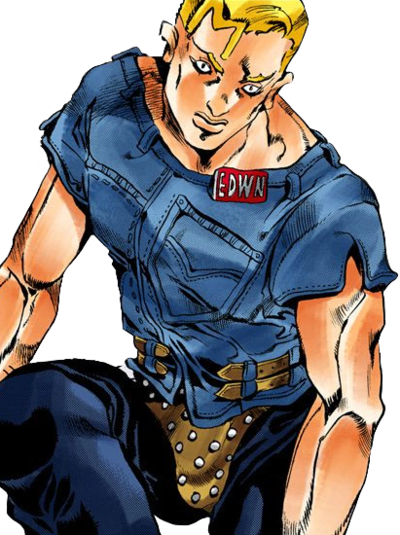 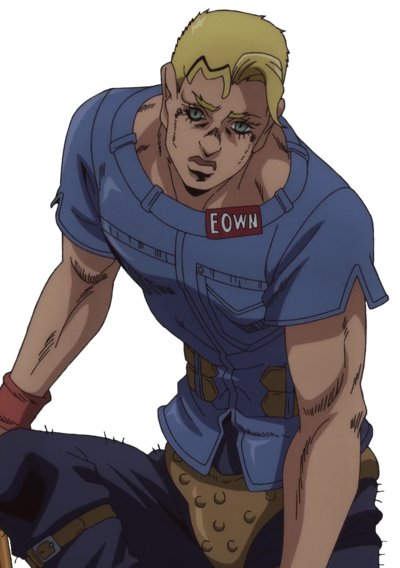 Monster Strike
The character featured in this article is sometimes referred to as "Xander McQueen".
“
I feel like dying.
”
—Thunder McQueen, SO Chapter 22: Ermes's Sticker, Part 2

McQueen is a man of average to above-average height and medium build. He has the letter "M" shaved on the right side of his forehead.[1] He has a unique feature that his pupils are vertical lines almost akin to the eyes of a cat.

He wears a short-sleeved jean shirt with a tag saying "EDWN" ("EOWN" in the anime) on the front of the collar, and fuzzy pants with a spotted crotch-piece. McQueen also sports numerous belts around his waist and legs, one of which he uses in an attempt to hang himself. 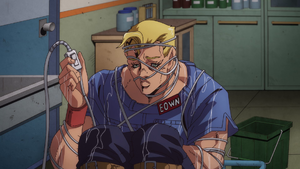 McQueen planning on electrocuting himself

As a result of his depression, McQueen often attempts to kill himself. When Ermes Costello asks him if he's well, McQueen is happy to have a woman care in some way about him, but that since he won't experience this bliss anymore, he might as well die.[7] He immediately hangs himself, which triggers his Stand power and hurts Ermes as well. Ermes actually discovers from scars on his wrists that he's attempted suicide on multiple occasions.[8] According to Whitesnake, McQueen bears a unique form of "evil" within him. While McQueen has no animosity nor malice within him, he also truly thinks he's a victim and wants someone to save him while doing nothing in return.[9] As such, he's the type of person who drags people down with him.[10] Whitesnake's appraisal is not confirmed, but as McQueen can sometimes feign being hopeful and reasonable before trying to kill himself again[11] and also wants Ermes to die with him so that he can alleviate his loneliness,[12] the appraisal seems quite accurate.

McQueen has a language tic and often elongates the words he pronounces. Despite his suicidal tendencies, he keeps a stash of money hidden in the prison and also steals from others, notably Ermes.[13]

McQueen's Stand is Highway to Hell, given to him via a Stand DISC. It will share all the damage that he receives to a designated victim.

McQueen would occasionally steal money from the sick inmates in the infirmary, racketing up five thousand dollars to which he would hide inside the handle of his mop. At one point, however, he was met with Whitesnake, who expresses appreciation for his uniquely twisted mind and wanting to cooperate with him as his "partner". McQueen would instead evade Whitesnake out of fear until he is cornered within the barn at the farmlands, to which he is given the Stand DISC of Highway to Hell as his ability.

Thunder McQueen was obtainable for a limited time as a collaboration character in the mobile game Monster Strike. 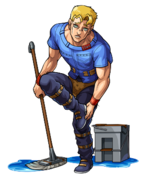 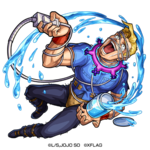