Man in the Mirror and Purple Haze, Part 3 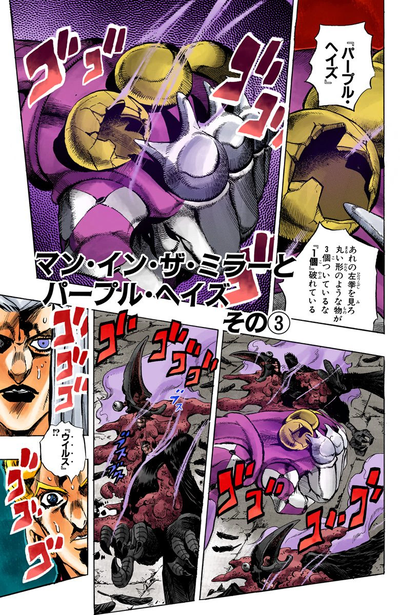 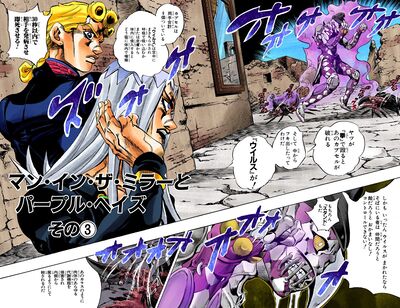 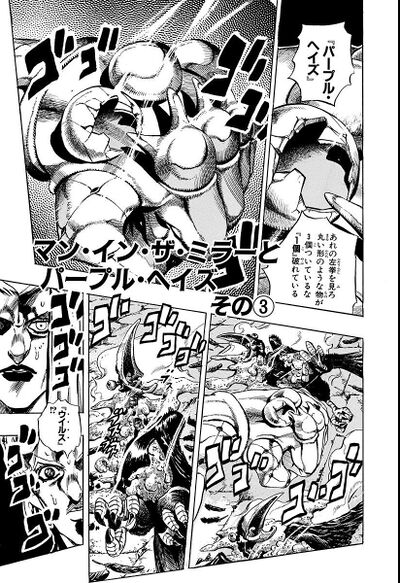 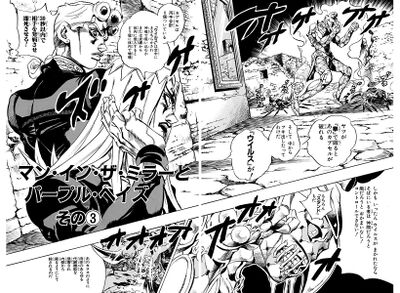 Man in the Mirror and Purple Haze, Part 3 (マン・イン・ザ・ミラーとパープル・ヘイズ その③, Man in za Mirā to Pāpuru Heizu Sono 3), originally There's Something to It! (何かある！, Nanika Aru!) in the WSJ release, is the forty-second chapter of Vento Aureo and the four hundred eighty-first chapter of the JoJo's Bizarre Adventure manga.

Fugo's Stand, Purple Haze, has the ability to release a deadly virus from its fists. This virus can kill anything that comes into contact with it within thirty seconds, including Fugo. Giorno and Abbacchio stay away from the terrifying Stand, as it seems to randomly punch anything near it. Fugo, stuck in the mirror world, has seemingly no control over his Stand. After Purple Haze calms down and wipes itself of its own drool, it falls back into a rage and punches the mirror Fugo was trapped in.

Abbacchio tells Giorno to leave the enemy to Fugo and help him retrieve the key, but Giorno refuses, stating that rescuing Fugo should be prioritized. The two argue over their priorities, leading to Abbacchio going to get the key on his own and Giorno staying to help Fugo. In the mirror world, Illuso comments on the dead crows and broken mirror.

He states that no matter what Purple Haze does it cannot harm him within the mirror world. Illuso prepares to punch Fugo, however he hears sounds and sees empty footprints, and deduces that one of Fugo's friends had abandoned him and went straight to the key. Illuso runs away from Fugo and heads toward Abbacchio. Abbacchio finds the key, but next to it is a large glass shard. Within this shard the man in the mirror, Illuso, appears.