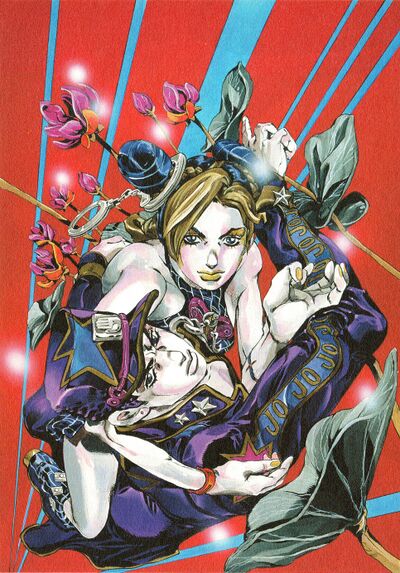 The Visitor (面会人, Menkainin) is the fourth story arc in the sixth part of JoJo's Bizarre Adventure, Stone Ocean.

It narrates Jotaro Kujo's visit to his daughter, the fight against the sniper Johngalli A., and Jotaro's subsequent theft of his Stand, Star Platinum and memories by the mysterious Whitesnake.

A visitor comes to visit Jolyne. However, a mysterious child named Emporio Alnino warns her that this is a trap. He hands her a worn-out sacrum bone and urges her to keep a hold of it. Inside the waiting room, Jolyne sees that she is visited by none other than her father, Jotaro Kujo. Jotaro asks if she had taken the pendant that he had gifted her, to which she refuses to reply due to her anger at him. Meanwhile, a Stand user in the men's prison is informed by a guard that a visitor had arrived, though not for him.

While Jolyne knocks out the guard in the meeting room, Jotaro informs her of the man who framed her for murder, Johngalli A., a disciple of DIO. The car accident had all been a part of his scheme to get her arrested so that he could kill her in prison. Jotaro, having arrived in order to break Jolyne out of jail, asks if she has used her Stand yet; as she hesitates to answer, they are both interrupted by an attack from Johngalli A.'s Stand, Manhattan Transfer.

In another location of the prison, Johngalli A. sets up his sniper rifle. Searching for the user, Jotaro sees the Stand and notices that it reads the air currents in the room and reacts to the energy created by Jolyne's strings, which tells the sniper where to shoot. The guard in the room wakes up to hit Jolyne but is subsequently hit by Manhattan Transfer, injuring Jotaro as well. Emporio appears to help the father and daughter but Johngalli A. targets him next, prompting Jolyne to save him.

Though the attacks seem to stop, they soon discover that everything that had happen had only been a hallucination, and the bone that had been given to Jolyne earlier woke her up. She notices an acid-like substance covering everyone in the room that also dissolves Stone Free's strings. Knowing that this is another Stand attack, they both leave the room, only to be ambushed by Johngalli A. himself and another mysterious Stand, Whitesnake. Whitesnake uses its power to remove Jotaro's Stand Star Platinum and Jotaro's memories in the form of two Stand Discs.

Jotaro sinks into a deathlike state but confesses to Jolyne that he's always cherished her. Jolyne, moved, defeats Johngalli A., sends her father's body alone to the Speedwagon Foundation, and resolves to find a way to recover the Stand Discs from Whitesnake's mysterious user.[1]