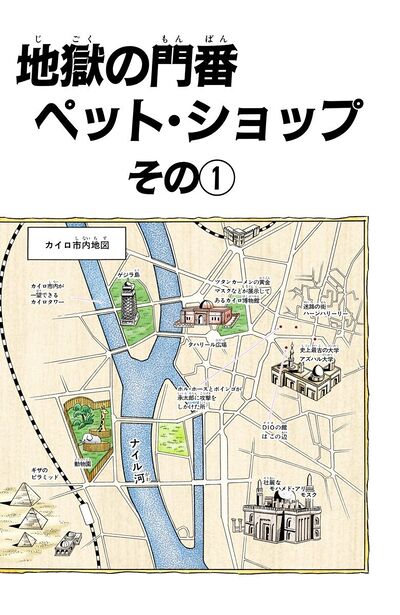 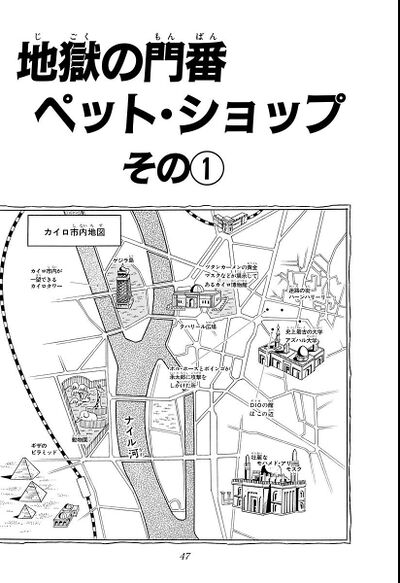 The Gatekeeper of Hell, Pet Shop, Part 1 (地獄の門番ペット・ショップ その①, Jigoku no Monban Petto Shoppu Sono 1), originally The Ice Bird (氷の鳥, Kōri no Tori) in the WSJ release, is the one hundred ninth chapter of Stardust Crusaders and the two hundred twenty-second chapter of the JoJo's Bizarre Adventure manga.

In Cairo, Polnareff sits in the street with a blanket over his head, trying to escape the heat. He is approached by a strange looking beggar. Polnareff tries to get away, but the beggar won't leave him alone, angered at Polnareff for "taking his customers." Avdol explains that in Cairo, the beggars have their own system, including territories and salaries. Avdol then pays the beggar to find the location of DIO's mansion. The beggar agrees and takes off his robes to reveal a suit, getting in his luxury vehicle and preparing his search.

Outside DIO's mansion, Iggy searches for food. There he encounters two large bulldogs, Chibi and Buchi. The small Boston terrier gives them a terrifying glare and the dogs flee towards the mansion. The dogs see the shadow of a bird behind the mansion's door and stick their heads under to attack it. Iggy watches as the dogs are decapitated, their heads sent flying skewered by an icicle. The hellish bird of ice, Pet Shop, reveals itself to Iggy. At that moment, the beggar appears, glad that he has found the mansion. As he admires his work, a giant block of ice appears above him. The ice falls, both killing the man and ruining his car. Iggy watches in fear, knowing that he will have to dispatch this Stand user himself. 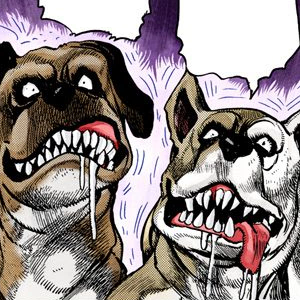 Author's Note
“
Diving for the first time in a while. Being in water without a single thought is the number one best way for reducing stress.
”
—Hirohiko Araki
“
久しぶりにダイビング。水の中で何も考えないのがストレス解消に一番よいです。
”
—Hirohiko Araki