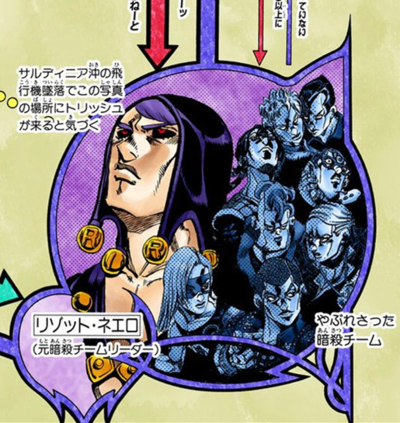 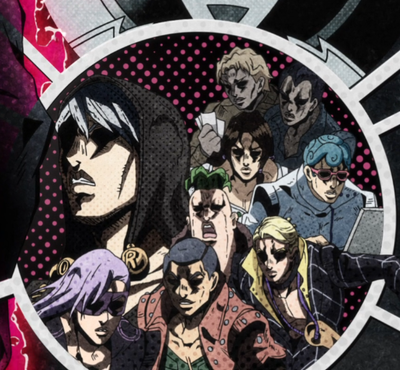 GW Episode 9
“
I'm gonna say it straight. Our team! We're nothing like those fools trying to pick up girls on the street or partying at the club. Those pathetic losers just scream and shout, going "I'll kill you! I'll kill you!" just to soothe their wounded egos. When we truly think "I'll kill you!" from the bottom of our hearts...! By that time, the deed has already been done!
”
—Prosciutto, Chapter 491: The Grateful Dead, Part 4

The group consists solely of Stand Users and serves as a secondary antagonistic force throughout the fifth part of the JoJo's Bizarre Adventure series, Vento Aureo, clashing against Passione's Team Bucciarati in their attempts to take Trish.

La Squadra Esecuzioni was a team of assassins created by Passione and put under the leadership of Risotto Nero. It's primary role was to carry on various assassinations beneficial to the gang. The members would receive a bonus for each kill, but nothing else, since they were distrusted by the organization.[1]

The anime adaptation has the address of the team's hideout designated as Vico Pallonetto Santa Chiara, 8, 80134, Napoli NA.[2]

Two months before the events of Vento Aureo, the death of Donatella Una triggered interest in her daughter Trish Una, as Donatella was the Boss's former lover. Risotto and his team then investigate Donatella's home and discover Trish's link with the Boss. Hoping to learn of him by using her and using her Stand as a detector for the Boss, Squadra Esecuzioni defected from Passione and scattered across Italy to track her down. Just after Trish was taken in by Pericolo, La Squadra Esecuzioni ransacked Donatella and Trish's apartment in search for clues, ironically missing a crucial photo of Donatella that was taken by the Boss himself.

Formaggio was the first to discover Trish's whereabouts, having noticed that Bucciarati's Squadra Guardie del corpo didn't attend Polpo's funeral despite him being their own direct capo. He tailed Narancia Ghirga and interrogated him, confirming his suspicion about Trish and a fight ensued, which ended in Formaggio's death. The fight is thought to have attracted the attention of every member of Squadra Esecuzioni toward Team Bucciarati and forced them to move Trish.[3]

Illuso was the second to confront the group, fighting at once Giorno Giovanna, Pannacotta Fugo, and Leone Abbacchio in Pompeii in order to seize a key critical for Trish's transportation. Taking the three of them on, he came close to eliminating both Fugo and Abbacchio. However, Giorno's actions ultimately resulted in Illuso being killed by Purple Haze's virus.[4]

The duo Prosciutto and Pesci then managed to track Team Bucciarati up to a train toward Florence, who were hiding in a turtle. Jeopardizing the lives of everyone on-board and nearly killing Guido Mista, they were killed at the hands of Bruno Bucciarati. However, the two ultimately managed to stop the train, hindering the group's movements. Before his death, Prosciutto also called fellow assassin Melone and informed him of the group's location.[5]

Melone went up to the train, and using his Long-Ranged Stand, Baby Face, tracked the group and attempted to stealthily kidnap Trish Una, immediately defeating Bucciarati. However, Giorno Giovanna managed to stop Baby Face and sent a venomous snake after Melone, killing him before he could make more of his Stand from Bucciarati's DNA. During the fight, Melone had to call Ghiaccio and Risotto Nero for help; Ghiaccio was the first to arrive at the indicated location of the fight, but Team Bucciarati had already moved on.[6]

It is revealed that Ghiaccio and Risotto managed to corner Pericolo, forcing him to commit suicide inside the turtle.[7] From his burnt laptop Ghiaccio managed to extract a photograph of Venice, which enabled him to interrupt Giorno Giovanna and Guido Mista's search for a disk containing the Boss's final orders. The combined efforts of the two Stand users still overcame his powerful ice-controlling Stand White Album and might, and Ghiaccio died.[8]

Meanwhile, Risotto Nero was investigating Sardinia to uncover the Boss's past directly. After Team Bucciarati defected from Passione themselves, Risotto eventually encountered Vinegar Doppio, who was the Boss's split personality and had arrived on the island to intercept them. He successfully determined his true identity and a fight ensued, as Bucciarati, Abbacchio, and Narancia were close by, guided to the island by Trish Una herself. While he had the upper hand against Doppio, the Boss's helping strategy shone through and baited Narancia's Aerosmith that had found them as enemies into attacking Risotto. The heavily wounded assassin had finally met the Boss, but only in defeat. Attempting to enact a final attack using Aerosmith's bullets, Diavolo's King Crimson rendered it useless, and Risotto was ultimately shot himself. Squadra Esecuzioni was no more.[9]