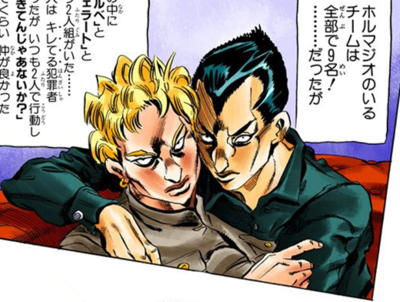 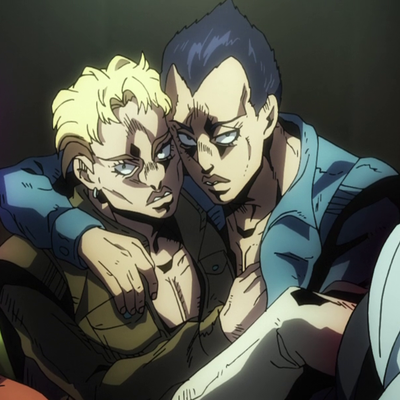 Sorbet and Gelato are introduced during Formaggio's recollection of his motivations for wanting to kidnap Trish Una. Both were members of Passione specialized in assassination and were always so close to each other that they were rumored to be a couple. Apparently disgruntled by the lack of money their boss granted them, they attempted to pursue his identity to steal his territory. This results in the two being abducted.[6] Sorbet and Gelato's team attempt to search for them but to no avail.

Gelato is tied up and forced to watch Sorbet being cross-sectioned into thirty-six pieces with a sharp knife, starting with his toes. His face distorts in fear during the torture. Gelato becomes overcome with fear and despair seeing his partner gruesomely tortured. He commits suicide by swallowing his cloth gag into his throat to suffocate, saving himself from further terror. Gelato's corpse was found dead on the sofa in his house, with the cloth still stuck in his throat and a note attached that read "Punishment".[2][7]

Days later, thirty-six individual cross-sections of Sorbet are delivered in individual packages to the assassin team. Each body part was preserved in formalin and placed inside frames.[2]

In the anime, Pesci realizes that it's Sorbet based on the color of his nail polish. The team members mourn for their loss and Risotto eventually tells them to forget all about Sorbet and Gelato. They decide to never pursue the Boss's identity again until they find out the Boss had a daughter.[4]

They are later shown being recounted by Risotto Nero as he remembers his rebellion against the boss to avenge them.[8] 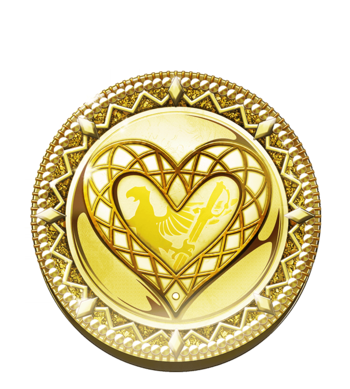 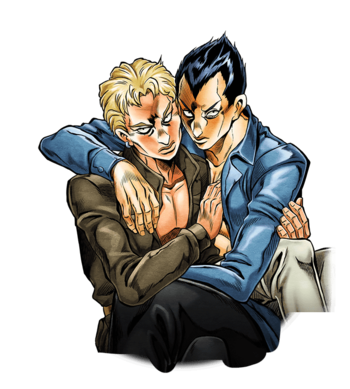 HP
15,000
ATK
15,000
Profile
“
Two members of La Squadra. "They were so close, that I wondered if they were actually together." The two were always together.
”
How to Obtain
Ability

Dangerous Investigation
When this unit appears on the field you’ll be able to see the enemies HP and ATK!
Cost: 0 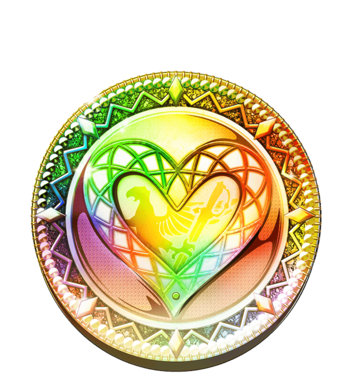 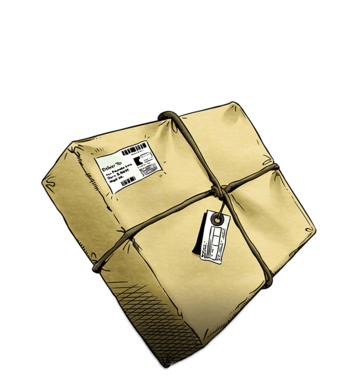 Green frame
The unit with this Ability equipped will have a bordered frame around the unit.
Cost: 1