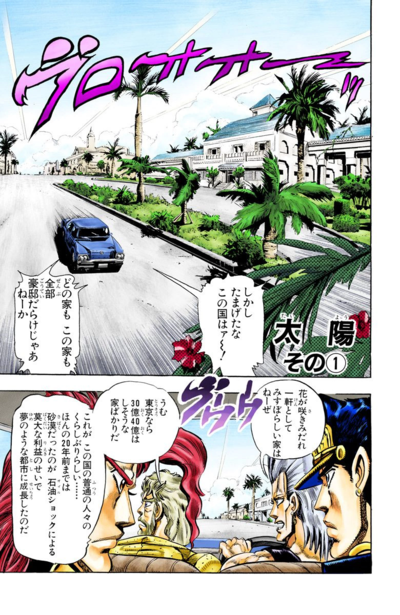 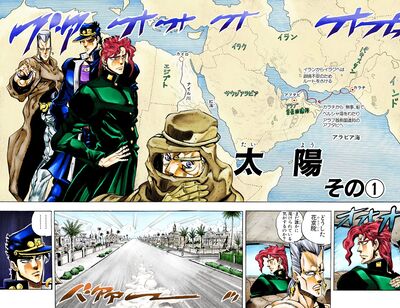 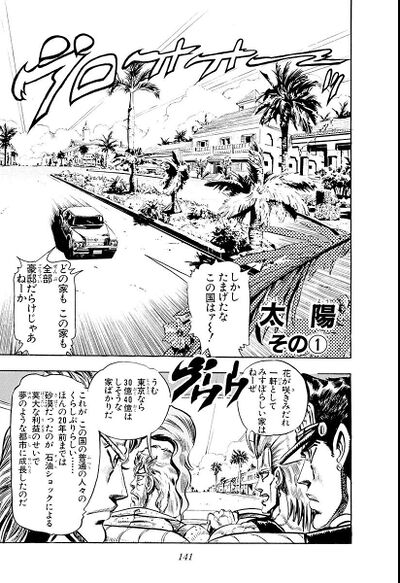 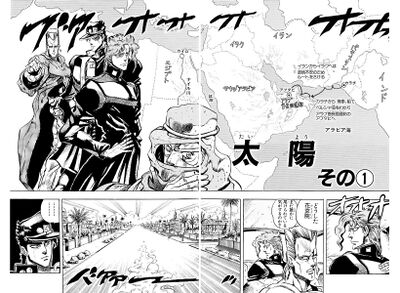 Sun, Part 1 (太陽 その①, Taiyō Sono 1), originally The Desert Sun (砂漠の太陽, Sabaku no Taiyō) in the WSJ release, is the fifty-third chapter of Stardust Crusaders and the one hundred sixty-sixth chapter of the JoJo's Bizarre Adventure manga.

Having crossed the Gulf Straight from Karachi, the Joestar group safely arrive in the city of Abu Dhabi, though Kakyoin cannot shake the feeling that they are being followed, thanks in part to their encounters along the way and the "loss" of Avdol.

Joseph reveals the next stage of their journey requires them to head 100 km Northwest to the village of Yabrin by helicopter, as it would take two days to reach it by car due to the mountains and deserts between them. Jotaro, naturally, voices his discomfort at flying in anything with Joseph (who has been in three aircraft crashes in his life), forcing Joseph to change their plans to crossing the desert on camelback, to Polnareff's discomfort.

After renting the camels and showing the rest of the group how to ride them (with hilarious results), the group set out across the desert. Kakyoin once again feels that they're being followed, but, again, it appears they are not, leading Polnareff to question his nerves.

As the heat slowly rises, Polnareff's comment about it rising to 50 degrees leads Joseph to check his watch, only to be stunned at the time (8:10), well past the time the sun should have started to set.  As if sensing their awareness, the temperature jumps to 60 Degrees Celsius, which, coupled by Polnareff noticing the "Sun" is rising from the west, to lead the group to deduce that the "Sun" is, in fact, an enemy Stand.