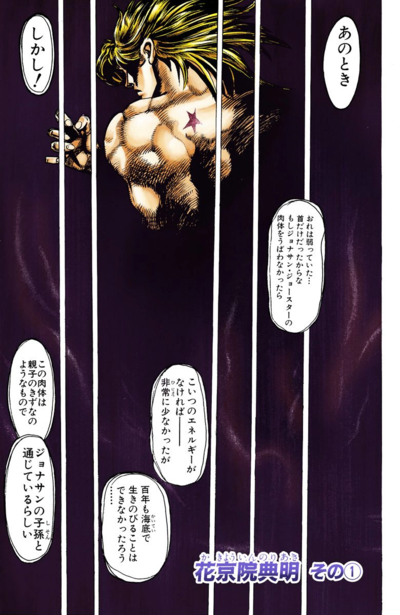 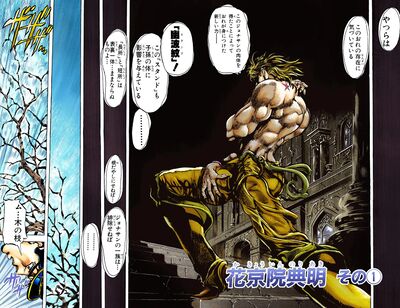 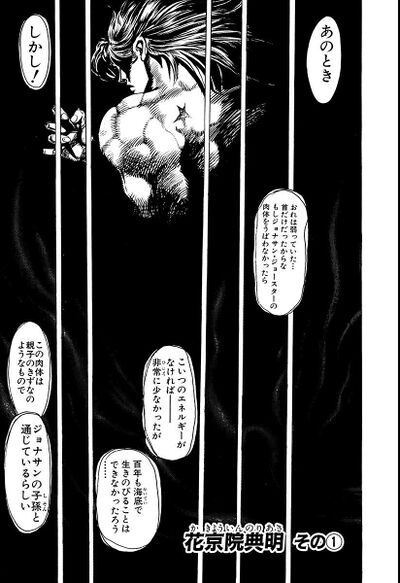 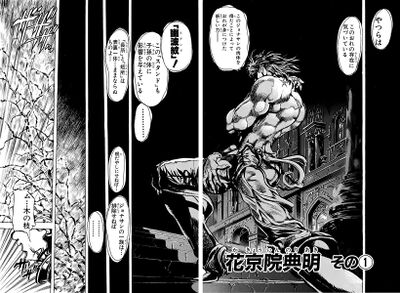 Noriaki Kakyoin, Part 1 (花京院典明 その①, Kakyōin Noriaki Sono 1), originally The Terrible Invader (戦慄の侵入者, Senritsu no Shinnyūsha) in the WSJ release, is the fifth chapter of Stardust Crusaders and the one hundred eighteenth chapter of the JoJo's Bizarre Adventure manga.

DIO recalls how he survived under the ocean and is determined to kill the Joestar Family, as they have acquired Stands just like him. To that end, he sends several Stand users to complete this task. One of these users attacks Jotaro on the stairs, which causes him to fall. With his Stand, Jotaro manages to grab onto a branch but is unable to determine who attacked his knee. His attacker, named Noriaki Kakyoin, lends him a handkerchief to wipe the blood. He says he arrived as a transfer student the previous day, increasing Jotaro's suspicions.

Jotaro goes to his school's infirmary to get his knee treated. His handkerchief falls out of his pocket when he gets up, and he discovers that it has a note inside from Kakyoin saying "Jotaro Kujo, I will kill you today with my Stand!". Suddenly, the nurse treating him attacks two students with a fountain pen, stabbing one in the eye. As she stabs Jotaro's cheek, he tries to defend himself and notices that the nurse is too strong for an ordinary woman.

Kakyoin appears behind him, sitting on the windowsill. He explains that his Stand, Hierophant Green, has possessed the nurse. The young man says that he swore loyalty to DIO and was sent to prevent Jotaro and the others from discovering DIO's location. To prevent the nurse from being harmed, Jotaro kisses her and uses his Stand to drag out Hierophant Green with its teeth from the nurse’s mouth.