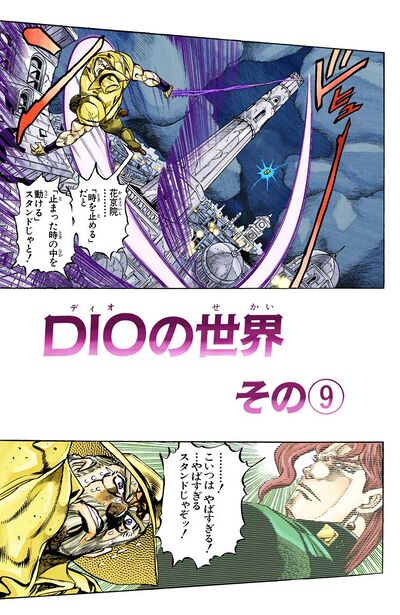 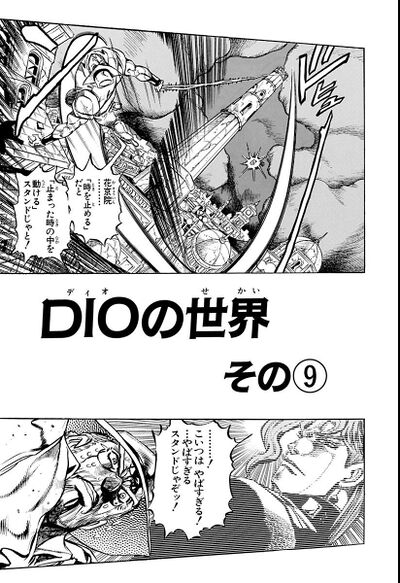 Thanks to Kakyoin's dying message, Joseph figures out that The World can stop time. Joseph swings from the rooftops, running from DIO to come up with a way to counter The World. DIO stops time and reappears in front of Joseph. The World goes in to attack but stops upon the realization that Joseph has a Ripple infused Hermit Purple wrapped around his body. Joseph tells DIO that he has learned the secret of The World and that he knows it can only stop time for a few seconds. DIO explains that it doesn't matter what Joseph knows and that the Ripple no longer poses a threat. The World punches at the rooftop, causing the debris to launch Joseph onto street level. On the street, Joseph sees Jotaro. He warns his grandson about the frozen time. DIO stops time and runs toward Joseph, pushing away anything that stands before him. DIO prepares to strike but remembers the Ripple flowing through Joseph. He instead takes a knife and throws it at Joseph. Time resumes. The knife strikes Joseph right below the throat. DIO taunts Jotaro, the only one left standing in his way.

Author's Note
“
Volume 25, for sale on the 10th! The absolute climax of the game with D'Arby the Younger!! Please make sure to read it, okay?!
”
—Hirohiko Araki
“
㉕巻は、10日に発売！ダービー弟との絶対白熱！！ぜひ読んで下さいねっ！！
”
—Hirohiko Araki