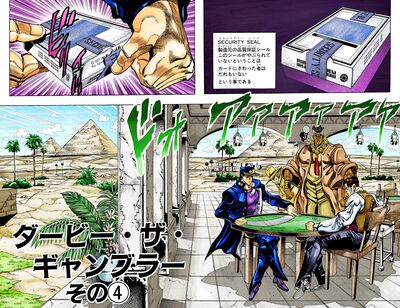 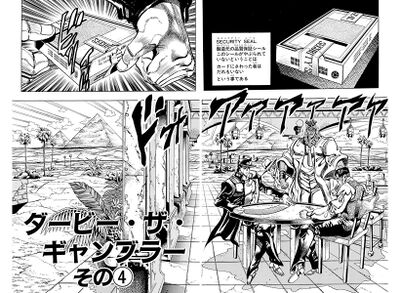 D'Arby the Gambler, Part 4 (ダービー・ザ・ギャンブラー その④, Dābī za Gyanburā Sono 4), originally The Punishment for Cheating (イカサマの罰, Ikasama no Batsu) in the WSJ release, is the one hundred first chapter of Stardust Crusaders and the two hundred fourteenth chapter of the JoJo's Bizarre Adventure manga.

To win back both Joseph and Polnareff's soul, Jotaro must defeat D'Arby in a game of poker. Jotaro inspects the deck and gives them to D'Arby to deal. D'Arby shuffles and begins dealing, but as he deals Star Platinum breaks his index finger. Jotaro reveals that D'Arby tried to deal him the second card, rather than the top one, and broke his finger as punishment. D'Arby exclaims that Jotaro was too harsh, but Jotaro states he was too kind, and that he should have ripped it off. As D'Arby is no longer able to deal, Jotaro has Avdol get a boy playing nearby to deal instead. D'Arby splits up Polnareff and Joseph's souls into six chips each and explains that by gaining six chips will win back one soul. He also gives Jotaro six white chips to represent his soul. The boy deals the two their cards. D'Arby wages one Polnareff chip and the game begins.

Author's Note
“
The world seems to be enjoying the warm weather, but I guess I'm just different, me being someone who loves winter and hates summer.
”
—Hirohiko Araki
“
世間は陽気が暖て喜んでいるでしょうが、冬好き夏嫌いの私は、別なのです。
”
—Hirohiko Araki