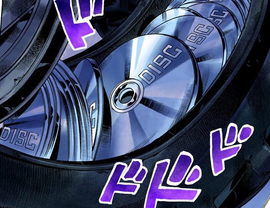 A Disc () is an item conjured and manipulated by Enrico Pucci's Stand, Whitesnake.

The Discs are similar in appearance to Compact disc

s but have the word "DISC" engraved on them in capital letters. A Stand can be seen inside the Stand Discs while memories can be glanced at in Memory Discs, although a full examination requires the insertion of the disc.

Despite their appearance, the Discs feel rubbery and elastic,[1] instead of like plastic, making them impervious to physical damage. The Discs are perennial, existing even long after Whitesnake ceases to exist, and are indestructible unless inserted into a dying person, causing the inserted disc to slowly crumble.

Unlike Stands, an ordinary person can see the Discs.[2]

There are two main types of Discs: 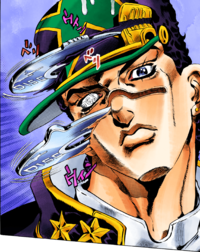 These discs are mainly used to store information and abilities for later use and can be consulted or used by putting the disc inside someone's head.

Pucci is able to create other types of discs. By inserting discs with information or impossible situations, Pucci can command people to follow his bidding.[5][6] Some discs containing a person's sense, like sight, can be extracted.[7]