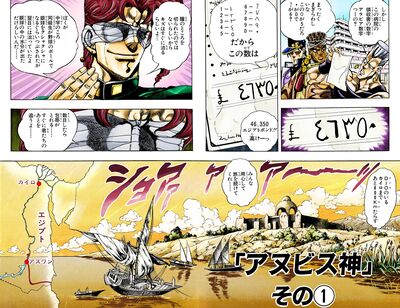 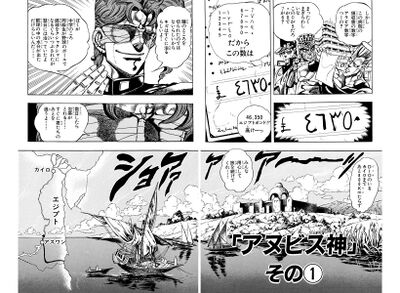 Anubis, Part 1 (「アヌビス神」 その①, 'Anubisu-shin' Sono 1), originally The Sword of Anubis (アヌビスの剣, Anubisu no Tsurugi) in the WSJ release, is the eightieth chapter of Stardust Crusaders and the one hundred ninety-third chapter of the JoJo's Bizarre Adventure manga.

Author's Note
“
During nighttime hurricanes, for some reason my heart is always calm. Listening to the sounds of the wind and the wonder of it all, I'm able to sleep well.
”
—Hirohiko Araki
“
台風の夜は、何故か心が落ち着く。風の音を聞いていると不思議と良く眠れます。
”
—Hirohiko Araki