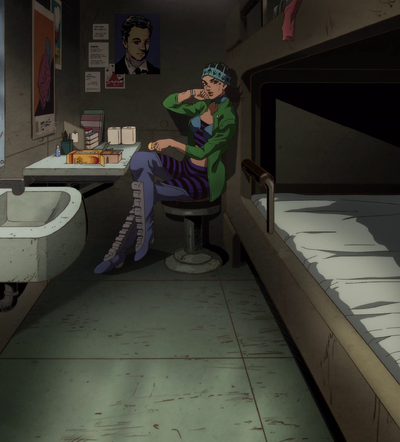 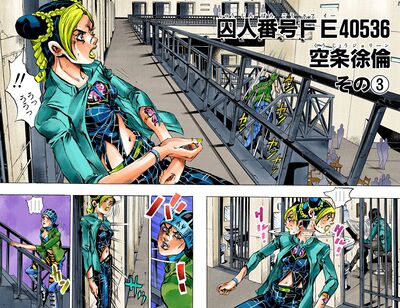 It narrates Jolyne's first day in jail and her meeting with her cellmate Gwess.

Jolyne starts to grow accustomed in the prison. After Loccobarocco and his alligator puppet assistant Charlotte orient the prisoners, Jolyne steals the former's metallic pen using her strings.

Later on, Jolyne is brought to her new cell. She meets her new cellmate Gwess, whom immediately becomes hostile towards her after she settles her things on Gwess' bunk. Jolyne notices her pendant on the bed and attempts to buy it, prompting Gwess to sell it at a high price. She also notices the parakeet on Gwess' breast pocket having its head seem to come off.[1]

In the following morning, Gwess returns the pendant to make amends with Jolyne, having already taken the shard inside. Jolyne misses breakfast and later sees the photo of her mother and father from Gwess' food trash. While Gwess trains her pet parakeet, Jolyne snatches it away and discovers that it was not an actual bird, but a tiny human inside a bird's corpse. It then dies on her hand.[2]

Jolyne figures that Gwess must have gotten this ability from her pendant before the latter spots her and shrinks her into a small size. She tells Jolyne that she wants to join forces with her, and puts her in a mouse's corpse to scout for a way to escape the prison.[3]