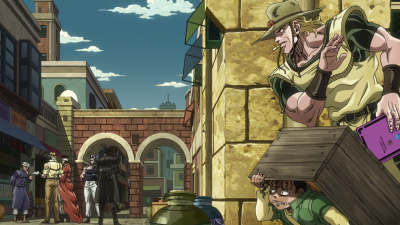 It narrates Hol Horse and Boingo's comical attempt at assassinating the Joestar Group.

Hol Horse comes back in Cairo after abducting Boingo to use Tohth to his advantage. After verifying Tohth's reliability in its predictions, Hol Horse is ready to follow its instructions. He is still taken aback when the comic book reveals that after he puts his fingers in Polnareff's nose, the whole Joestar group will be taken down. Hol Horse follows the group, while Boingo remains hidden, but he is ambushed by Polnareff. Using a distraction, Hol Horse does put his finger in Polnareff's nose, but it does nothing. However, a group of punks try to ride over Hol Horse but run over the Joestar group instead.[1]

Tohth then predicts that Jotaro will come out, but that would be when Hol Horse shoots into drainages pipes at midday, Emperor's bullets will go through Jotaro's head. Hol Horse bribes some plumbers into opening the pipes and shoots just in time for midday, but Polnareff sneezes on Jotaro's face, which makes him back down and avoid the bullets. Hol Horse then realizes that his wristwatch was ahead. Distracted, Hol Horse realizes too late that his bullets are coming back toward him through the image of Jotaro's head in Tohth, and is defeated. Boingo promises to himself to become braver, but he accidentally angers Iggy, who defeats him putting him in the hospital with Hol Horse as well.[2]