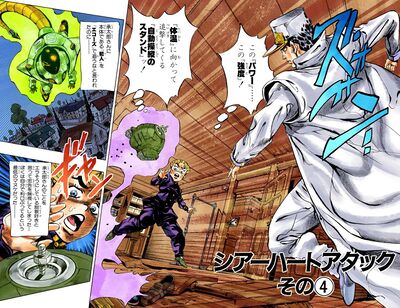 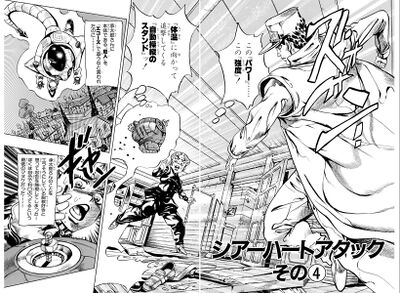 Despite Jotaro and Koichi having figured out that Sheer Heart Attack is a heat-seeking Stand, Koichi cannot do anything to defend himself since he carelessly sent Echoes away from him. Jotaro thus stops time again and uses Star Platinum to create a fire with two wood pieces. Explaining how he noted that the first thing Sheer Heart Attack targeted was the cup of hot tea the shop owner had, Jotaro deduced the miniature tank's mechanism and resumes time. However, he cannot dodge the incoming blast and protects himself the best he can, still ending up heavily wounded.

Koichi is now alone against the relentless Stand and tries to drag Jotaro to the back of the store, with Sheer Heart Attack on his trail. The lit bulb in the hallway provides a meager diversion while Koichi is now in the kitchen and lights the stove, only to find out that they are the electric type and will need time to heat up. Koichi cannot find other ways to make a heat source and Sheer Heart Attack approaches. Yet, observing the situation carefully, Koichi realizes that the enemy Stand has a fatal flaw. Meanwhile, Kira becomes worried since his Stand is taking too much time to kill his pursuers.