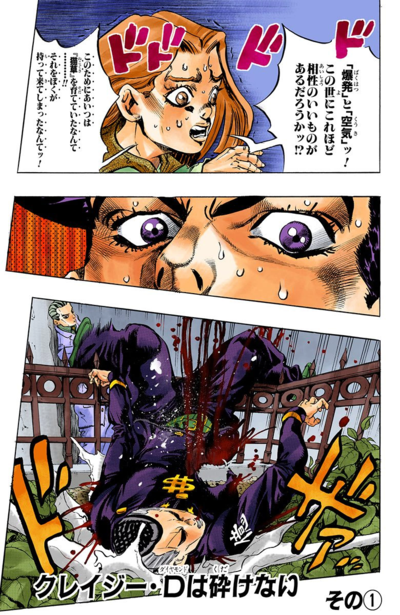 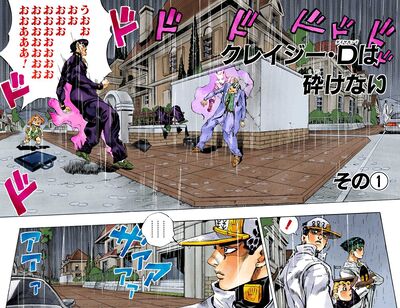 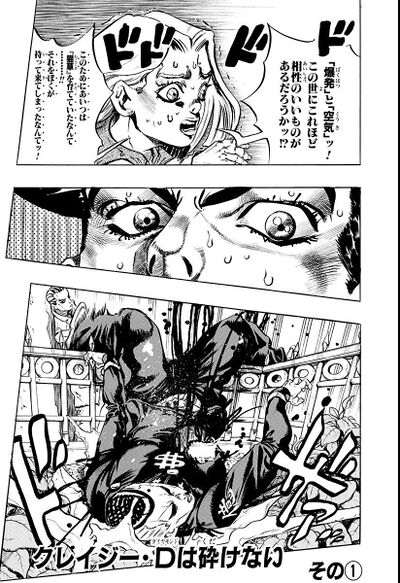 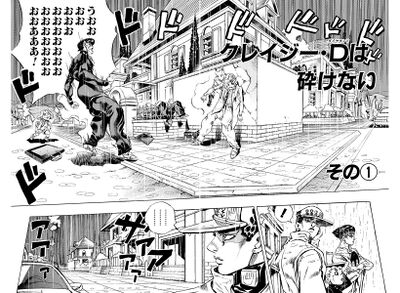 As Okuyasu falls to the ground, now bleeding heavily from the missing section of his torso, Hayato realizes too late that he played into Kira's hand by bringing Stray Cat with him in his backpack. The scene then cuts to Jotaro, Koichi, and Rohan, all standing in the rain, waiting for Josuke and Okuyasu. Jotaro then turns around suddenly, thinking he heard Okuyasu scream, but Rohan begins to become irritated as Josuke and Okuyasu are both late to their meeting, and begins to leave to Hayato's elementary school without the pair. Kira then reveals to Hayato and Josuke that he placed Stray Cat inside of Killer Queen's hollow stomach and that he is turning Stray Cat's air bullets into contact bombs. As Kira fires off another contact air bomb, Crazy Diamond slams the sidewalk and then repairs it to make a makeshift wall, blocking the explosion. As Josuke dashes to Okuyasu in order to heal him, Kira fires off another air bomb. Josuke makes another sidewalk shield, but the air bubble makes it through the shield without detonating, and then blows up as Crazy Diamond takes the brunt of the attack.

Kira then explains that not every bubble he charges as a bomb has to detonate on contact, and can be detonated at will using Killer Queen's first bomb. Kira then fires off another bomb, claiming that he can detonate his air bombs wherever he pleases. Josuke then rushes towards Kira, coming to the conclusion that Kira couldn't detonate the bombs too close to himself, or he would be in danger of killing himself. Josuke then moves to heal Okuyasu, only for Kira to smirk and move away. Hayato then warns Josuke that Kira may have charged Okuyasu as a bomb, but Josuke calls Kira's bluff, and moves in to heal Okuyasu.