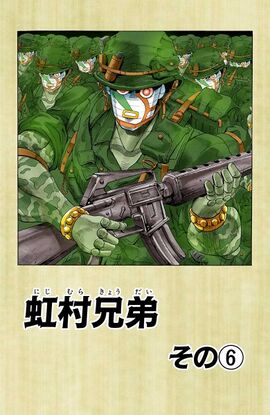 The Nijimura Brothers, Part 6 (虹村兄弟 その⑥, Nijimura Kyōdai Sono 6), originally The Mysterious Stand! (謎のスタンド！, Nazo no Sutando!) in the WSJ release, is the fourteenth chapter of Diamond is Unbreakable and the two hundred seventy-ninth chapter of the JoJo's Bizarre Adventure manga.

Keicho appears on the other side of the room and is surprised that Koichi has acquired a Stand. Josuke tries to attack him with Crazy Diamond, but Bad Company protects Keicho and shoots him. Keicho says that Bad Company will do anything to protect him now that they are in formation, and that he is angry that Josuke killed three of his troops earlier and ruined the formation. Keicho says that he wants to keep Koichi, or as he calls him, "pumpkin", alive because he may be the one Keicho is looking for. Keicho says that Crazy Diamond's range is probably only up to 2 meters and that maybe Koichi's Stand could help Josuke defeat him.

Josuke tells Koichi to just imagine himself being in danger and wanting to protect himself, and the Stand will emerge naturally. Koichi doesn't succeed in summoning his Stand, but when one of Keicho's soldiers attacks him, he manages to summon an egg. The egg starts to crack, which only Keicho notices. He tells his troops to prepare to fire, and Josuke tells Koichi to call back his Stand. Koichi is unsuccessful, so Crazy Diamond kicks the Stand out of the way of Bad Company, as well as Koichi.

Bad Company attacks Josuke but he deflects all of the missiles. Keicho thinks that Koichi is the one he is looking for, and now he just needs to kill Josuke.