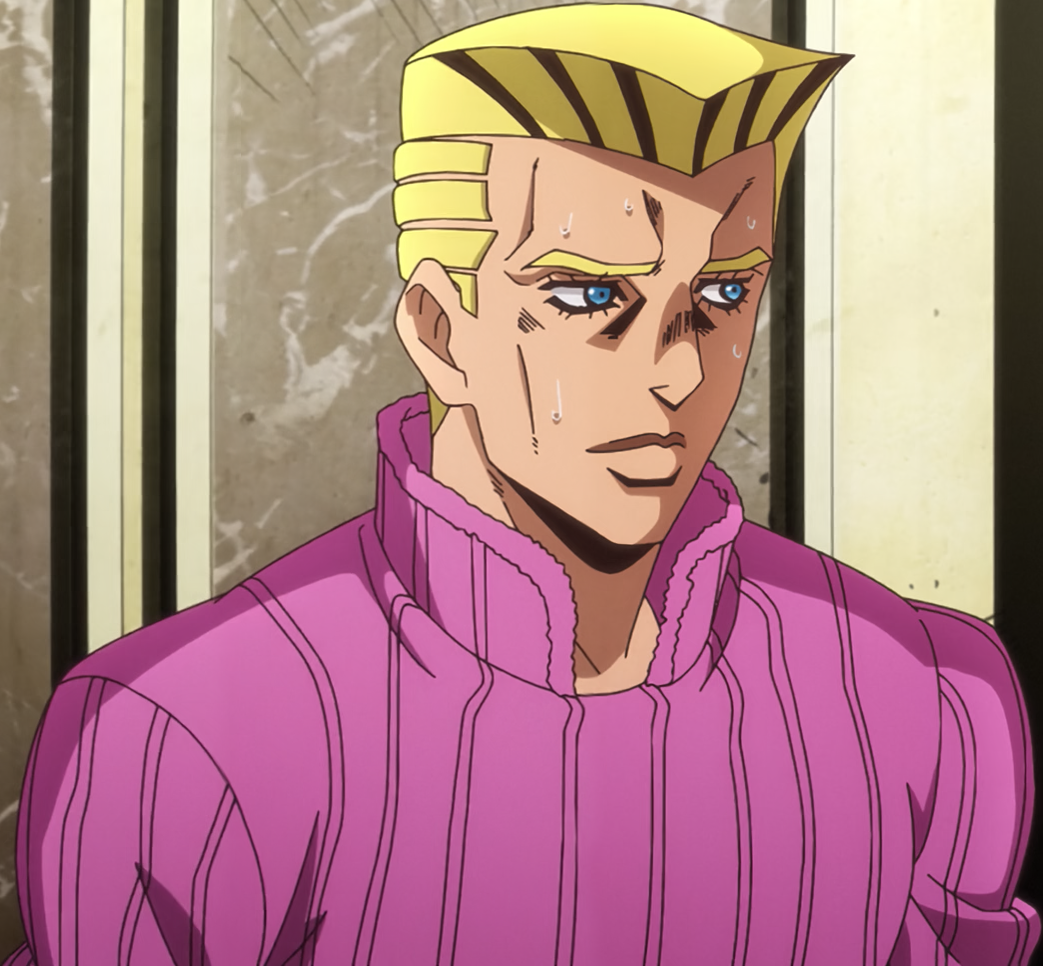 Romeo Jisso (ロメオ･ジッソ) is a tertiary character featured in the sixth part of the JoJo's Bizarre Adventure series, Stone Ocean.

He is the boyfriend of Jolyne Cujoh until the couple gets into a car accident, crashing into a pedestrian.

Romeo Jisso is a young athletic man who sports an undercut, the hair forming three to four stripes going around the side of the head. During his date with Jolyne, he wore a sweater. When Jolyne and co. break into his house, he wears a long-sleeved shirt with a single stripe that goes across from the right sleeve to the right hip.

Romeo bears the stereotypes of a son born into wealth: cowardly, selfish, and unwilling to admit to his responsibilities. He initially comes across as kind and flirtatious towards his ex-girlfriend, Jolyne Cujoh, but this attitude changes drastically after he seemingly crashes his car into a hitchhiker. Instead of calling the authorities he begs Jolyne to help him hide the body instead, putting emphasis on the dangers it could present to their future if the body is found. When that plan foils, he places the blame of his car accident on Jolyne out of worry for his college admissions, and is shown to have paid off a lawyer (who, interestingly, also acted under Johngalli A.'s orders[2]) to place Jolyne in jail for the next several years.[3]

Later, when Romeo is confronted by Jolyne he rushes into a panic and admits his guilt to her, begging for forgiveness. Although this plea seems disingenuous, Romeo remains loyal and purposely misleads the police into chasing Jolyne to Mexico.[4]

Romeo accidentally drives into a man

At some point before the events of Stone Ocean, Romeo was accepted into an unnamed university.

Romeo first appears alongside Jolyne on a car drive during an after school date. Him and Jolyne share a moment of intimacy until the car seemingly crashes into an unknowing pedestrian. In a state of panic he begs Jolyne to help him hide the body, explaining that dangers it could mean if they're ever caught. This plan doesn't work out, and they're both found to be linked to the death of the pedestrian.

After placing the blame onto Jolyne, he makes an alibi, stating that Jolyne was driving the entire time while under the influence from his car's mini-fridge, and that she was the one who ran into the pedestrian in order to save his own skin.

Coupled with Johngalli A.'s hired hack lawyer for Jolyne, his testimony allowed him to walk freely, but not without scorn from his former girlfriend.[5]

When the gang escapes from prison, Jolyne visits Romeo for supplies and transportation, with Ermes making a replica of his tongue so the group could hear everything he was saying. Romeo begs Jolyne for forgiveness, but Jolyne refuses, simply asking for a car and some money. Leaving the mansion, Jolyne plans to rip his tongue apart to avoid him informing the police, but surprisingly Romeo misleads the police into Mexico. The act of loyalty enables Jolyne and the others to escape freely. However Jolyne orders Ermes to release the sticker anyway, injuring Romeo's tongue.[4]