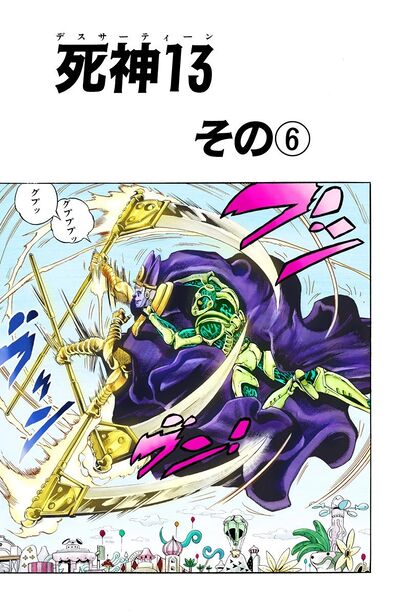 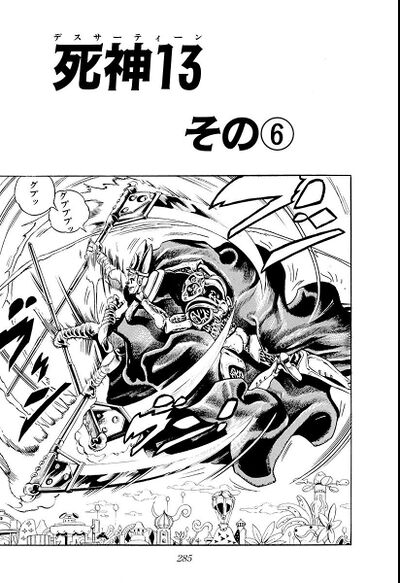 Death Thirteen, Part 6 ( その⑥, Desu Sātīn Sono 6), originally A Blind Spot in the Dream (夢の中の死角, Yume no Naka no Shikaku) in the WSJ release, is the sixtieth chapter of Stardust Crusaders and the one hundred seventy-third chapter of the JoJo's Bizarre Adventure manga.

Kakyoin wakes the group up the next morning, but none of them remember their dream. Polnareff expresses confusion at Kakyoin's missing scar. Kakyoin goes to change the baby's diaper, and tells him that he won't kill him. Kakyoin decides to leave the baby at the next town, but to ensure that the baby won't pursue them further, he mixes some of the baby's feces into the baby food. Joseph is delighted that Kakyoin made more baby food, but when he tries to feed him, the baby refuses to eat. Mannish Boy swears in his mind to never come near the group again. Polnareff tickles the baby to get him to open his mouth, and Joseph feeds him the spoonful. Kakyoin smiles and hums to himself, and Jotaro expressing confusion behind him.