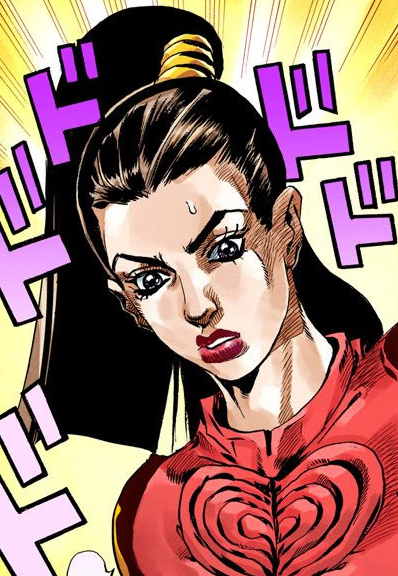 First Lady of the United States

SBR Chapter 50 Spoiler (Death)
SBR Chapter 85 (Mentioned only)
“
I want you to call my name, Lucy. Please... Everyone calls me "First Lady"... Say "Scarlet" loudly, now! I want you to say it like you’re reproaching me...
”
—Scarlet Valentine, SBR Chapter 49: Tubular Bells, Part 2

Scarlet Valentine is a slim woman with long dark hair kept tied into a ponytail with several rings. She wears a dark bodysuit partially quilted on the legs and bearing several crown symbols on the arms. Over that bodysuit, Scarlet wears a short sleeveless dress with a multi-layered heart motif on the chest.

The series is known for alternating colors between media, the information presented below may or may not be canon.
Skin(Fair, pink lipstick.)
Hair(Brown, golden hair rings.)
Eyes(Lavender)
Outfit
(Pink blouse over a dark purple shirt with yellow crows on the sleeves, red and dark purple striped skirt, black and white stockings.)

Under her flighty exterior, Scarlet will still try to kill anyone threatening her husband

Scarlet is a strong and ambitious woman. She is not shy, having no trouble talking about her husband even when she is seducing a woman, and often takes the initiative. Scarlet follows her impulses when in a relationship. She is bisexual, as she shows affection towards her husband, but also desires intimate contact with women. One of her fetishes seems to be facesitting.

Scarlet is subsequently disguised as Lucy and thrown in the Fox River by Hot Pants in a ploy to allow Lucy to pose as the First Lady.[3]

After their call, time starts accelerating from Made in Heaven Ultimate Requiem while Funny is on the island of Great Britain. As Scarlet is not affected in America, from her perspective it appeared as if Great Britain suddenly vanished and reappeared. When The Funniest Valentine calls her again, Scarlet panics, asking what is going on in the island. She asks a flurry of detailed questions which The Funniest answers before hanging up.[4]