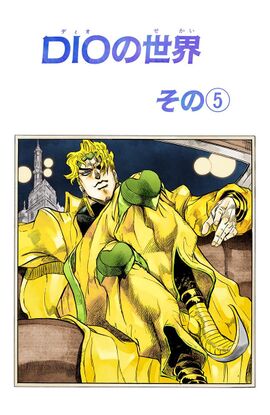 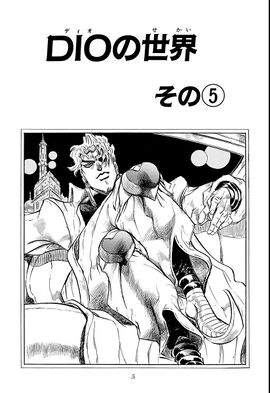 DIO's World, Part 5 (DIOの世界 その⑤, DIO no Sekai Sono 5), originally The Senator's Misfortune (上院議員の災難, Jūketsukiingiin no Sainan) in the WSJ release, is the one hundred thirty-eighth chapter of Stardust Crusaders and the two hundred fifty-first chapter of the JoJo's Bizarre Adventure manga.

Despite the threats and arrogance of the politician, DIO simply rips out his teeth and asks him again to get into the driver's seat. Fearful and confused, he decides to leap from the car, only to find himself back inside. He does so multiple times before eventually giving up and appeasing DIO by enthusiastically taking to his demands. By order of DIO, the senator drives after Joseph and Kakyoin. Joseph explains to Kakyoin that he can sense DIO's blood lust approaching through Jonathan's body.

Elsewhere in the city, Polnareff and Jotaro try to hijack a motorcycle in order to chase after DIO. Polnareff tries to rewire the bike but fails. Jotaro kicks the engine and the bike begins to run. In the busy Cairo streets, Senator Wilson and DIO are stuck in traffic. DIO orders Wilson to drive in the sidewalk to avoid the traffic. Wilson pleads with DIO not to but eventually succumbs to DIO's overwhelming charisma. Wilson plows through the crowds, coating the car in blood and viscera. Wilson asks if DIO will spare his life for following orders. DIO replies that he won't. Wilson's mind snaps, completely losing any sense of sanity he had. DIO's car gets closer to the Joestar's. Suddenly, Hierophant Green appears next to the car and attacks DIO with an Emerald Splash.