A summary of Diavolo's history and movesets in video games.

Diavolo appears in GioGio's Bizarre Adventure as the enemy faced in Chapters 7-1, 7-2, 11-1, and 11-3, making him the enemy fought the most times in the game. In battle, Diavolo uses King Crimson to chop, impale, blast, blind, and knock back his opponents. In Chapter 7-1, the player must survive for one minute, and in Chapters 7-2 and 11-1, they must deplete a very small portion of The Boss's health to survive the battle; in Chapter 11-3, the player must finally defeat Diavolo completely.

Diavolo appears as a shadowy figure in Chapters 7-1 and 7-2, his true identity unknown to Team Bucciarati. In these battles, his ability takes the form of teleportation, somewhat akin to how a normal person would see the effects of King Crimson; in Chapter 7-2, this teleportation is accompanied by a flash of inverted color, similar in effect to many of DIO's time-stopping abilities in Heritage for the Future and All-Star Battle. King Crimson can punch the floor and send debris flying, dealing heavy damage and destroying columns around the stage. Attempting to attack Diavolo while he is idle or otherwise not in the middle of an attack will cause him to teleport and counterattack, having taken no damage.

During Chapters 11-1 and 11-3, Diavolo gains two more abilities. King Crimson's debris is replaced by a powerful shockwave that covers nearly the entire stage, sending the player flying and dealing heavy damage if it connects. In addition, whenever Diavolo uses King Crimson's ability, the screen's color is inverted and time slows down for everything except him and King Crimson. Diavolo can still be damaged while King Crimson's effect is active, making it more akin to a "time-slowing" ability than true time erasure. When Diavolo's health hits zero for the first time in 11-3, Diavolo unleashes a non-damaging shockwave to knock the player away and recovers a fifth of his health; when this health is emptied, Diavolo is finally defeated. 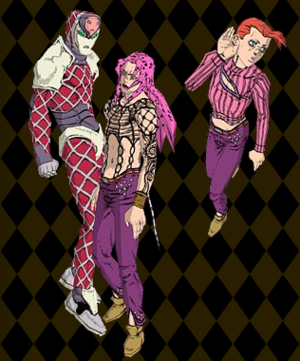 There's no escape!
Your actions are nullified!

I've taken your life!
This is the end!

Forecast!
I can see it!
Non-Playable Character