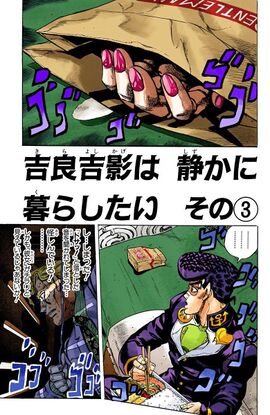 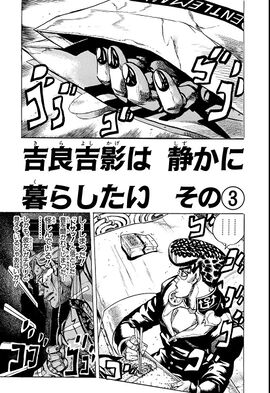 The bag falling causes a noise which prompts Josuke to investigate, but just before he can grab it, Shigechi appears from the other room and accuses him of attempting to steal his lunch. Deciding to leave it be, Josuke goes off to get his tea, allowing Kira enough time to retrieve the bag. Shigechi returns to the room to discover the bag missing and immediately sends out Harvest to search the vicinity, initially believing that Josuke and/or Okuyasu were responsible. Just as the Stand manages to find the bag and Kira underneath the vaulting box, the school's gym teacher discovers the three students, forcing them to escape through the window.

After the coach leaves, Kira makes his way to the outside with the bag in hand, only to be confronted by Shigechi, who had secretly planted Harvest on Kira's arm. Shigechi questions why the stranger stole his sandwich, but Kira both feigns ignorance while simultaneously telling the truth, claiming that the bag was his. Shigechi, not believing him, uses Harvest to pull on the bag in an attempt to retrieve it. As Kira pulls on it as well, the paper bag eventually rips and its contents, the severed hand, falls onto the ground. Kira discovers that Shigechi has a similar ability to his, while Shigechi himself is surprised and shocked by the hand, as well as the fact that Kira can see his Harvest.