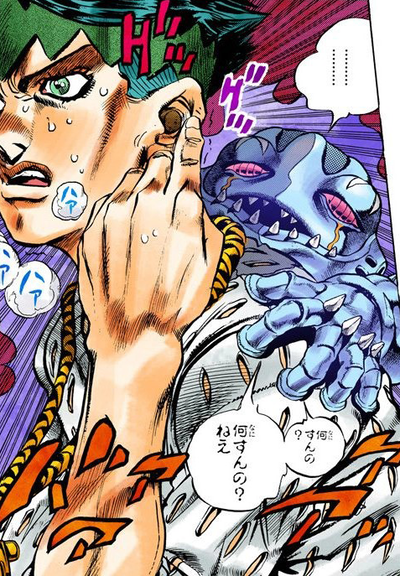 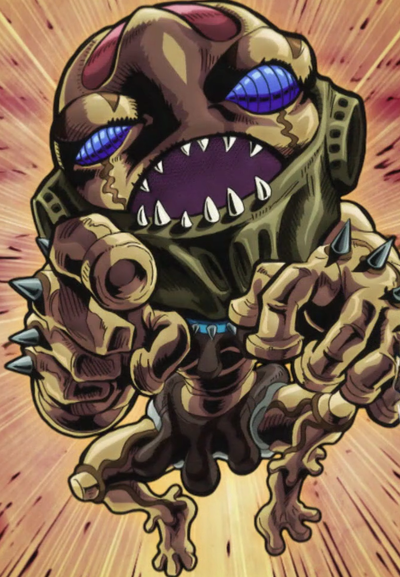 Cheap Trick (チープ・トリック, Chīpu Torikku) is originally the Stand of Masazo Kinoto and temporarily of Rohan Kishibe. It is a tertiary antagonist featured in the fourth part of the JoJo's Bizarre Adventure series, Diamond is Unbreakable.

It is a dwarfish humanoid Stand that latches onto its victim's back. Having no power other than being able to speak, it does its best to have someone else see the victim's back. If it happens, the victim dies and the witness becomes Cheap Trick's new host. 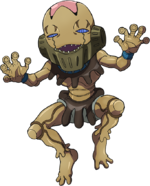 Cheap Trick is a Stand bound to its user's back. It resembles a humanoid frog with mechanical features and suction cup fingers allowing it to cling to someone's back. It has lazy, semi-closed eyes, and a kind of mechanical apparatus strapped to its chin, as well as relatively large teeth. It is visible to others while clinging to its current user's back, and if anyone else sees it the user will be killed and the Stand will transfer itself to its new target.

Its concept was based on Onbu-Obake (also known as Obariyon), a piggyback yōkai that jumps onto people's backs and makes them heavier until they can no longer walk.[2]

The series is known for alternating colors between media, the information presented below may or may not be canon.
Body(Cyan and navy)
Eyes(Pink)
Body
(Light and dark brown with blue joints and olive green jaw)
Eyes(Blue)

Cheap Trick is obsessed with killing the one whose back it is attached to by making others see it. Its personality is vicious and sadistic, using any possible tactics from repeatedly taunting and disorienting its "user" to predicting their death. It also seems to take extreme pride in its "talking" as it often comments on how weak yet how effective it is.

Cheap Trick has a speech tic of terminating its phrases by adding "ne" (ね), a Japanese confirmation particle akin to "okay".

Cheap Trick is a unique Stand in that it can change users and actively seeks its current user's demise. Its sole purpose is actually to single out a victim and wear down its user's psyche until it can kill them and carry on to another hapless user.

Although very weak (it cannot even pull off a sticky band-aid),[3] it is also quasi-invulnerable and only needs someone to see its user's back to kill it, making it very dangerous.

Cheap Trick's signature ability is to attach itself to its user's back, beginning with Masazo Kinoto.[4]

Cheap Trick is nearly impossible to get rid of

When it attaches itself to someone's back, Cheap Trick becomes the new host's Stand even if the individual already has a Stand and can only be seen by the User.[5] As the Stand of the host, it cannot be attacked by the host without said host harming themselves since it is technically a part of them.[5] Cheap Trick can also not be removed from their back and forceful removal would simply rip the user's skin off, killing them. However, it is susceptible to the malicious spirits of the Ghost Girl's Alley and it may be the only way to safely remove it without harm.[6]

Cheap Trick then actively and relentlessly seeks to make someone else look at the user's back, being especially dangerous when the host is asleep because it can then act unnoticed.[3] If it happens, Cheap Trick detaches from the host, killing them in the process, and attaches itself to the looker's back, beginning its process anew.[4] Previous users are reduced to a dried-up doll-sized version of themselves as a result of Cheap Trick sucking their life force out upon detachment.[5]

Cheap Trick's other ability is its power to make itself heard and understood by anyone, even animals.[7] It describes "talking" as its main ability.

Cheap Trick's modus operandi is to verbally pester its host to wear them down psychologically, but can also do other things with its speech ability.

Unlike other sentient Stands, Cheap Trick can converse with everyone, even non-Stand users.[3] Because people usually mistake Cheap Trick for the host, Cheap Trick can insult people so they try to attack the host. At one point, it even told the animals of the neighborhood that Rohan was cruel to them, unleashing every surrounding stray on the mangaka.[7]

Cheap Trick was the Stand of architect Masazo Kinoto.[5] Created when Yoshihiro Kira hit Kinoto in the back with an Arrow, it is dispatched to kill Rohan Kishibe and destroy the photos Rohan had taken in the search for Yoshikage Kira's new identity. Kinoto was unaware of the Stand's presence but instinctively felt that he needed to hide his back and managed to reach Rohan's house that way.

After Kinoto's death, Cheap Trick attaches itself to Rohan. Rohan tries to use Heaven's Door but ends up turning himself into a book since Cheap Trick is now technically the mangaka's Stand. Moreover, Cheap Trick's power makes it impossible for Rohan to shake him off. The Stand itself then relentlessly tells Rohan to burn his photos.[4] Rohan tries to call Koichi for help, but Koichi ends up believing Rohan is playing a prank on him and leaves. Isolated, Rohan then decides to search for Kira in the photos but ends up falling asleep. Cheap Trick uses this opportunity to call for multiple deliveries, and the deliverymen almost see Rohan's back. Thankfully, the door to his office bumps on his chair, waking up the mangaka in time.

Rohan decides to go to Morioh Grand Hotel to get Jotaro Kujo's help, walking the streets while hiding his back from passerby's. At a crossing, Rohan sticks his back to another man to safely cross the streets, but Cheap Trick insults the man, goading him to make him turn back. However, Rohan has Heaven's Door and forces the man to keep walking.

Afterward, Cheap Trick speaks to the cats and dogs of the city, pretending that Rohan is torturing animals for fun. The animals attack Rohan but Koichi reappears to save the mangaka. Still, even Koichi's Echoes ACT3 cannot force Cheap Trick off Rohan's back. Rohan seemingly goes mad and shows his back to Koichi, making Cheap Trick turn back to attack the boy. However, Rohan then reveals that they are in Ghost Girl's Alley. Cheap Trick is horrified to see a multitude of disembodied hands come out to take him away. To ensure Cheap Trick has the worst possible fate, Rohan uses Heaven's Door to command it to go to Hell.[6]