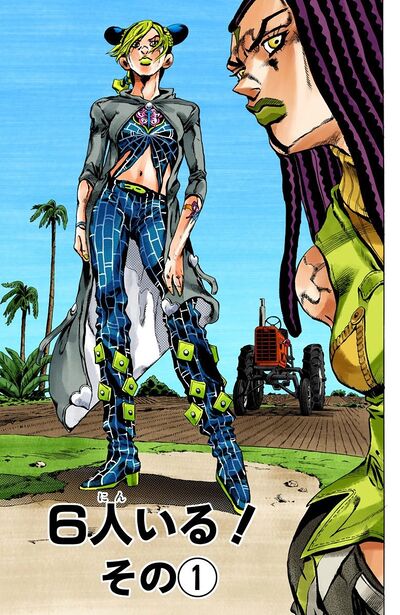 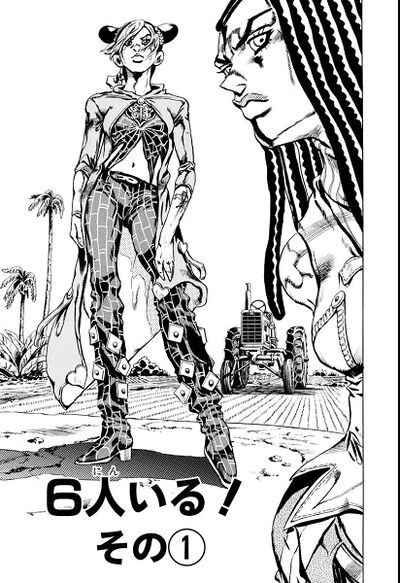 In Green Dolphin Street Prison's farm barn, two prisoners anxiously try to escape from a monster. They attempt to close a heavy door within the barn to trap the creature, but it severs the arms of one of the prisoners and devours him.

Back at the female prison, Loccobarocco and Charlotte have gathered all the female inmates at the sports ground. Loccobarocco announces that two prisoners have gone missing on the farm grounds and that there will be a search team formed to find them. Five prisoners, including Jolyne and Ermes, volunteer. The guards put special bracelets on the inmates that will explode if tampered with or if they get fifty meters away from a guard.

On the farmlands, Jolyne asks Ermes if she brought the disc she got from McQueen. Ermes explains that she watched the disc's memories multiple times, and that she is sure returning Jotaro's discs will revive him. Jolyne has Ermes rewatch the disc, which shows Whitesnake inserting a Stand Disc into McQueen. On the disc, the reflection of a tractor can be seen.

Inside the tire of the tractor is a large stash of Stand Discs. Jolyne deduces that Whitesnake is collecting Stand Discs to create Stand users, hiding them in the tractor so others cannot find them. Jolyne and Ermes decide to check the tractor after figuring that Jotaro's discs are likely to be in it.