A summary of Yoshikage Kira's history and movesets in video games. 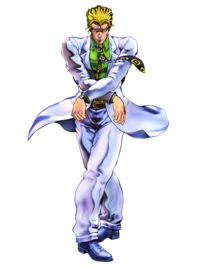 Yoshikage Kira makes his gaming debut in the PS3 title, playable as two different characters: His original form and face with Killer Queen & Sheer Heart Attack; and his awakened form under the identity of "Kosaku Kawajiri", with Killer Queen, Stray Cat, and access to Bites the Dust. This makes him one of the only three characters with two incarnations, the others being Dio Brando and Joseph Joestar. Both versions of Kira are voiced by Rikiya Koyama, who previously voiced Will Anthonio Zeppeli once in the Phantom Blood game.

Both Kiras are part of the mass majority of playable characters in the game with the "Stand" Style, being able to turn Killer Queen on/off, changing movesets, and having access to the Stand Rush ability returning from the Capcom game, being able to attack in conjunction with their Stand.

Kira's original form appears as a DLC character included with pre-orders and first edition prints of the original Japanese release of the game. For the overseas release in the US, pre-ordering the game from Club Namco would also get players a free download code for Kira, whilst for EU players, pre-ordering the game from any retailer in that region would get the player both Kira and Shigekiyo Yangu as well. Yoshikage Kira has 950 HP.

Yoshikage Kira's Costume A is taken from his debut in Chapter 69 of Diamond is Unbreakable. His second color scheme for Costume A also originates from the cover of Volume 38.

Style/Specials/Etc
Only one bomb at a time
Passive

Killer Queen may not have more than one bomb out at a time. If Kira performs any skill that would create a new bomb, any existing bomb is overwritten and nullified.

Kira can summon or dismiss his Killer Queen, shifting his available abilities.

It's your fate to be defeated

Killer Queen appears from above and delivers a downwards stomp. This is a middle attack that cannot be blocked crouching. A command normal that can hit a downed opponent, and can chain into Kira's skills.
Though this move is identical to 'Kosaku'-Kira's "I'll crush you!" skill, its name implies it to be the stomp Killer Queen used on Echoes ACT3 during their confrontation. (Comboable)

Kira immediately detonates whatever bomb may be out at the moment. Any skill marked with a star (☆) produces a new bomb. The explosions of all of Kira's bombs cannot be blocked, but Kira himself is at risk of taking damage if he is too close to the blast.

Special Moves (Stand Off)
Anything can be a bomb [☆]

Killer Queen is summoned to flick a small coin primed with the first bomb in an arc as a projectile, bouncing and eventually stopping if it hits the ground. The attack button inputted determines the coin's distance as well as the explosive power of the bomb. The coin will explode as soon as the opponent comes in contact with it, even as it sits on the ground. It can also be manually detonated to catch them in the blast if they are in range. (Comboable)

Kira summons Killer Queen to rush forward in a barrage of punches, pushing the opponent away and knocking them down. Although this move is a punch rush-style of attack, Kira cannot actually initiate Rush Mode, and a similar move by other opponents will easily overpower Killer Queen. (Flash Cancel comboable)

Killer Queen channels its power into its index finger, before both it and Kira chop downward. If Heavy (

) is inputted, the strike is delivered slowly but becomes unblockable. If the opponent is struck, they themselves become a bomb. Kira can then detonate them at any time to deal heavy damage and launch them upwards. However, the explosion will not actually register if the opponent is down, wasting the attack. A Stand Rush skill that Kira can disconnect from to freely act while it is executing. (Flash Cancel comboable)

Killer Queen unleashes a barrage of punches on the spot, knocking the opponent off their feet. Although this move is a punch rush-style of attack, Kira cannot actually initiate Rush Mode, and a similar move by other opponents will easily overpower Killer Queen. A Stand Rush skill that Kira can disconnect from to freely act while it is executing. (Flash Cancel comboable)

Killer Queen readies a counterattack by striking a defensive stance, rapidly moving its hands around its face. If the opponent strikes Kira with a non-Throw/HHA/GHA physical attack, Killer Queen counters with a punch that knocks them off their feet.

Kira grabs the opponent by the neck before slamming them to the ground and stomping on their head.

Killer Queen charges the first bomb in its index finger before swinging its arm downward. If it hits, Kira steps back and repeatedly detonates the opponent six times, knocking them into the air and juggling them. After the fifth explosion, he adjusts his tie while looking away shortly before the sixth and largest explosion triggers, sending the opponent flying.

Kira launches Killer Queen's second bomb, Sheer Heart Attack. SHA cannot be blocked and follows the opponent until it connects, flies off-screen if dodged, Kira's HHG runs out, enough time passes, or Kira is struck. If SHA connects, it will ram and drill into the opponent's abdomen, knock them into the air in an upwards leap, then fall toward them. Yelling at the opponent to look at it, Sheer Heart Attack detonates in their face at point-blank range, while Kira faces away and brags about its lack of weaknesses.
Sheer Heart Attack can be temporarily slowed by Koichi Hirose specifically, if the latter uses ACT3's "S-H-I-T" skill or his HHA on it, which will also subsequently affect Kira himself. SHA continues to be unblockable and able to hit him if Koichi makes contact, but will remain sluggish and unable to leap at him until Koichi gets a certain distance away from it, or hits Kira to nullify the bomb altogether.

Kira is a rushdown character who utilizes powerful bombs in his offense to deliver tremendous damage. While able to apply constant pressure, he also wields various ranged attacks and counters/reversals to help gain more opportunities to use his Stand's power. Both of Kira's primary bomb abilities launch the opponent and deal high damage, offering very effective combos when Heart Heat is spent. Notably, his HHA has great utility, functioning as a strong anti-air, reversal, and an attack that can catch a Dodging opponent all at once. Due to its unblockable nature, his GHA is a powerful tool that can even be guaranteed when attacking an opponent's guard without leaving them time to recover and dodge.

Kira's effectiveness diminishes greatly when at range as both of his skills able to attack from a distance are easily avoided or interrupted. This requires him to maintain good spacing to both remain at full strength and at the same time keep himself safe from his own explosions. In the absence of his HHA, Kira also lacks an anti-air attack and reversal, making it difficult to break the opponent's own offense unless with a well-placed counter. Because of this, zoners and other characters that can perform well at mid-range, as well as those who approach from the air can cause him much grief.

Yoshikage Kira performs at his best when the opponent is down or on the defensive, giving him time to set up his bombs. Through careful detonation, he leaves the opponent little in the way of defending against his attacks. Wielding Killer Queen's deadly power, Kira unleashes formidable extended combos and devastating explosions. Kira is widely considered one of the highest-damaging characters in the game, able to decisively finish battles in only a few interactions.