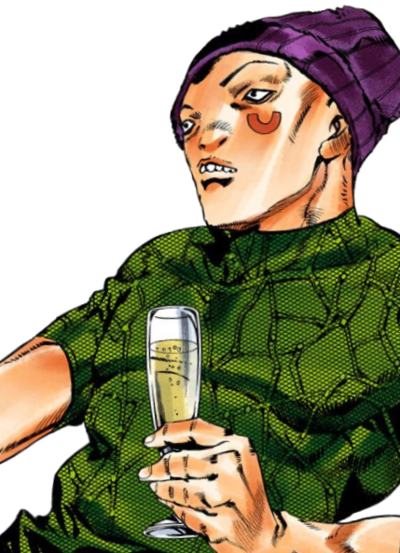 Ungalo is a young man with average build and height, possessing a rather flat face, small eyes, and big visible teeth, and a "U"-shaped mark under the left eye. Ungalo wears a shirt with multiple randomly placed dots connected with each other by lines, and a knit cap. Cornrows can be seen underneath his cap.[3]

Along with his brothers, Ungalo inherits the Joestar birthmark from his father.

Ungalo's violent nature shows in his first appearance when holding Father Pucci hostage to escape law enforcement. He points scissors at the priest's throat, threatening to stab it if the police officers take their guns out.[3]

After Pucci awakens his Stand Bohemian Rhapsody, Ungalo becomes filled with a drive and happiness manifesting from his new-found ability. Capable of taking revenge on the world, he throws away his need for drug abuse and finds purpose in defending the priest. However, when Bohemian Rhapsody is defeated, Ungalo slips back to his hopeless nature and loses his will to live.[4] 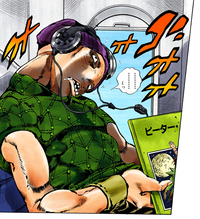 Ungalo activated Bohemian Rhapsody to bring fictional characters to life, where they run amok in the world. He travels in a plane, drinking wine and enjoying hearing of the chaos his newfound power caused, claiming it as revenge against the whole world for the miserable life he had. However, he is distracted by a cheerful girl reading from a Peter Pan book, and realizes that his Stand was already defeated when he sees the titular character on the cover. Ungalo subsequently loses his will to live upon realizing that he will be reverting back to his hopeless life.