A summary of Koichi Hirose's history and movesets in video games. 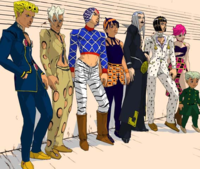 Koichi was planned to be in the GioGio PS2 game, likely as a playable character as there are beta pictures of him appearing in the game (such as one of him appearing with the main characters of Vento Aureo and in another one looking for Giorno and his stolen luggage). However, for unknown reasons Koichi was removed from the game, with no trace of him even in the game's Gallery Mode (unlike other characters, such as Risotto Nero or Leaky-Eye Luca, who do not appear in Story Mode but have viewable characters models regardless).

In canon Vento Aureo, Koichi has a confrontation with Giorno over his stolen items and later helps him fight against Black Sabbath. As he was absent from the game, the Story Mode begins with the narrative skipping to Giorno on the tram being confronted by Bucciarati in Chapter 1, and in Chapter 3, Giorno fights Black Sabbath by himself.