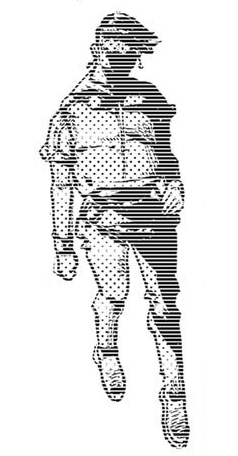 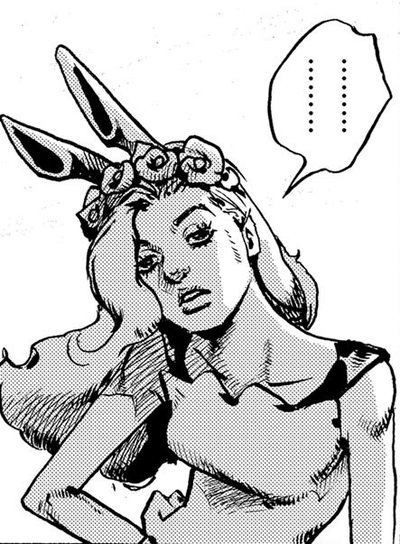 It is an ancient creature that resides in a mirror within the interior shrine of a Japanese yew tree at Mutsu-kabe Shrine.

Yabubako-Hoshi takes the appearance of the reflection of anyone who looks at the mirror it resides in. Its D.N.A and appearance are exactly the same as its victim.

As Rohan Kishibe's doppelgänger, it appears with its eyes covered in shadows and a smirking face. The mirror itself is circular and sits on a base.

Yabubako-Hoshi is a mischievous creature who unleashes the inner-most darkest thoughts and desires of the person whose reflection is captured by the mirror. As Rohan's reflection, Yabubako-Hoshi goes as far as mistreating Rohan's dog and making one of Rohan's fans pregnant. It does whatever it can to please itself until it is eventually satisfied and returns home within exactly three months.

Yabubako-Hoshi switching from Rohan to Eve

If the mirror captures a person's reflection, Yabubako-Hoshi is capable of transforming into that person and leaving from the mirror for exactly three months. In this form, it fulfills whatever dark thoughts the person had while the victim's body remains unconscious in the tree's interior shrine. Once it returns back home to the mirror, its victim awakens, unaware that any time had passed at all.

It is possible to overwrite any action that Yabubako-Hoshi committed outside of the tree by rotating the mirror 360 degrees to the left. However, the person must not have their image reflected on the mirror for this to occur. Thus, someone else would have to rotate the mirror and have Yabubako-Hoshi switch places with them.

Yabubako-Hoshi is around 500 years old, residing in an 800-year-old yew tree. Ever since the shrine was built, the creature constantly caused trouble to whoever approached it. The ancestors of the priests working there attempted to hide the tree's interior shrine by sealing off the entrance with stones and labeling another tree as the "sacred tree". However, every so often, someone would find the entrance and enter the tree, allowing Yabubako-Hoshi to escape.

On July 7, 2021, Rohan Kishibe finds the entrance to the tree's interior shrine and enters it. His image is reflected on the mirror and Yabubako-Hoshi escapes the tree with Rohan's appearance. Taking Bakin back home with it, Yakubako-Hoshi spends three months in Rohan's place. During this time, he would draw Hot Summer Martha, communicate with Kyoka Izumi, raise Bakin improperly, play baseball with Eve and also sleep with her.

Yabubako-Hoshi returns back home on October 7. However, Rohan attempts to revert its actions and uses Heaven's Door to turn the mirror in his place. Noticing Heaven's Door rather than Rohan still allows Yabubako-Hoshi to escape. It spends another three months in Rohan's place, abusing Bakin with a leash and getting Eve pregnant. It returns back home on January 7, 2022.

Rohan eventually uses his Stand on Eve to control her into turning the mirror. Consequently, Yabubako-Hoshi switches from Rohan to Eve, undoing every action it did as Rohan's doppelgänger. While Eve is unconscious, Yabubako-Hoshi goes back to Rohan's house. Rohan threatens to call the police if she trespasses on his property again and gives a warning to Yabubako-Hoshi to not cause any trouble. Happy that it got scolded by Rohan, it begins to leave, and Rohan gives it back Eve's pet crocodile.[1]