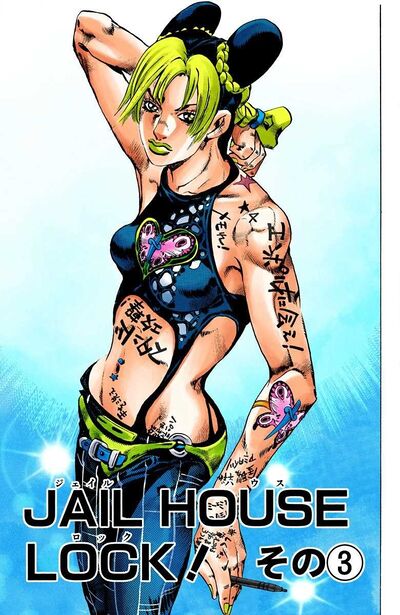 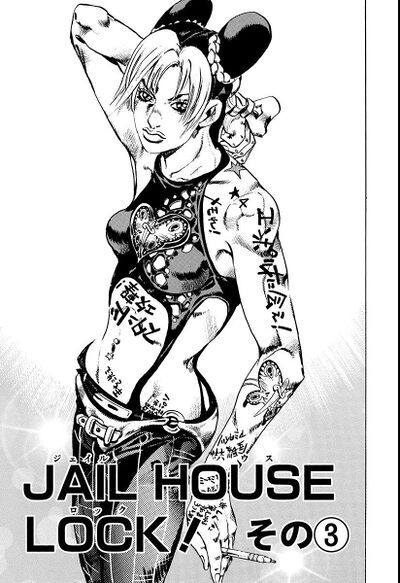 Jolyne stands in the line to get a meal, but finds that she didn't remember her meal ticket. She writes down to remember her meal ticket on her coat. She immediately forgets why she's in the room, musing over what it could be. Seeing a meal in the room, Jolyne begins to eat it as Gwess comes back and panics when she sees Jolyne eating her food. Jolyne offers her to get more with her own meal ticket, but Gwess denies, going herself. Jolyne decides to go and find Emporio, wondering if she can get to him considering the security where he is.

Suddenly, Miuccia steps over and asks if she can sit with Jolyne, interrupting her thoughts. Miuccia expresses her disgust when she steps on a cockroach, then proceeds to take her shoe off and put the cockroach in Jolyne's food. Jolyne tries to remember who this is, but Miuccia says three things so that Jolyne forgets. Miuccia spills food on Jolyne and tries to wipe it up quickly; she uses the opportunity to wipe off information from Jolyne's arms, then takes the note in her pocket, leaving Jolyne stunned. Afterwards, she sews "go meet Emporio" into her hand so that it can't be erased.

Emporio is seen inside his ghost room, suffering the same blight as Jolyne. He had spilled water and caused electricity to go through it. He realizes that he needs to see Jolyne right away, and that he needs to pull the plug that's causing the electric currents in the water. However, he is stuck in a cycle of forgetting and keeps electrocuting himself.