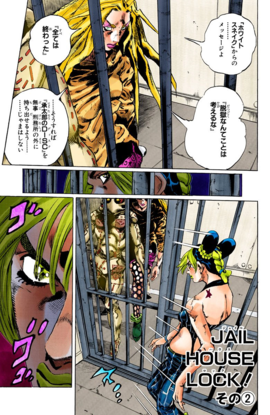 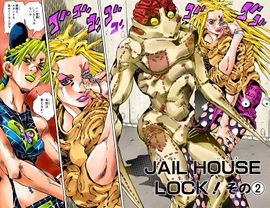 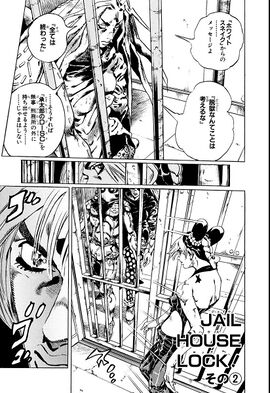 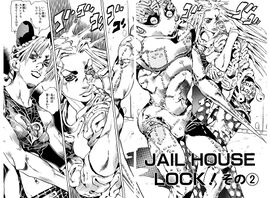 A woman relays a message from Whitesnake to Jolyne about how she shouldn't escape and should comply; if she does, he will make sure that Jotaro's Disc will get out of the prison. The woman introduces herself as Miuccia Miuller, or Miu Miu for short. Miuccia explains that her orders are to kill Jolyne if she escapes, and adds on that her other targets are Weather and Anasui.

Jolyne declares that she is escaping and summons Stone Free to attack Miuccia. Suddenly, she finds herself punching a poster on the wall of her normal cell, Gwess siting on the bunk bed reading and looking puzzled. She appears concerned and asks Jolyne if she wants her to call someone. Jolyne discovers her own handwriting on her body and figures that she wrote it on herself while she was asleep. Jolyne demands that Gwess tell her what's going on, then asks her for a pen, following the advice of the writing on her hand. Gwess doesn't respond, then pulls a piece of paper out of Jolyne's pocket.

Jolyne reads over it, and finds a diagnosis and explanation of what's wrong with her: her memory is lost, and she can only remember three things at a time. Jolyne realizes she is under the attack of an enemy Stand. Jolyne asks Gwess if she knows anyone named Miu Miu, the latter pointing to the hallway outside and saying that she just walked by. Jolyne steps out and sees her in the hallway, making Gwess repeat the information about Miu Miu.