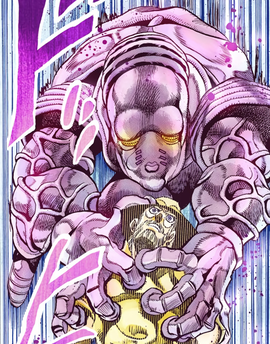 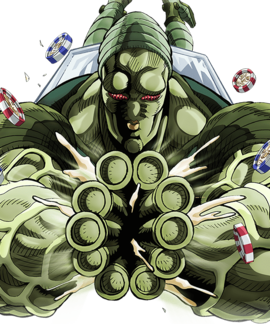 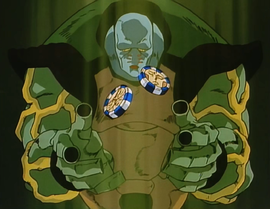 Osiris (オシリス神, Oshirisu-shin) is the Stand of Daniel J. D'Arby, featured in Stardust Crusaders. It is a hulking humanoid Stand whose ability is to steal souls, notably the souls of those who just lost a bet against D'Arby.

Osiris is a humanoid Stand with large, muscular arms marked by lines of a vascular pattern, a thick brow and fingers capped by suckers. It is only revealed from the chest up; mist obscuring its possible lower half.

According to JOJOVELLER, its appearance is a rearranged African traditional picture, with mechanical parts.

It doesn't show any personality and follows Daniel's instruction mindlessly.

; related to prosperity and life after death.

The series is known for alternating colors between media, the information presented below may or may not be canon.
Body(Light purple and purple)
Eyes(Yellow)
Body
(Light blue and dark green body, yellow veins)
Eyes(Light yellow)
Body(Light and dark green)
Eyes(Red)

Osiris is an Automatic that completes Daniel J. D'Arby's gambling and cheating skills. More precisely, it is the cooperation of Daniel's gambling and Osiris' ability to steal souls on easy-to-reach conditions that make the pair so dangerous. Because of this, Daniel nearly defeated the entirety of the Joestar Group.

Osiris has the ability to take the soul of anyone who loses to D'Arby in a bet or in a game.[1]

More specifically, it will act when the opponent "admits defeat in their heart", which is said to reduce their soul energy to near-zero. D'Arby needs his opponent to agree to gambling their soul in order for Osiris' ability to work.[2] If the loser bet the soul of another person, Osiris can take it even if that person is not present or agrees to it.[3] Cheating is allowed when gambling against D'Arby, since he deems cheating acceptable as long as you aren't caught.[2]

The souls are compressed by Osiris' hands and stored in the form of poker chips,[2] which D'Arby keeps as a collection. D'Arby is free to gamble individual souls[2] or even split a chip into several blank pieces to be used in a game, with all of the parts being equal to one soul.[4] If he recognizes defeat, the souls he's gambled are released.[5] He is also able to release any number of the souls he currently has at will.[5]

According to D'Arby, if he dies, so too do all of the souls he's collected.[2]

Osiris may have the ability to memorize anything that D'Arby touches, whether it be cards or page numbers. D'Arby has used this talent to cheat by touching Jotaro Kujo's cards, allowing D'Arby to know if Jotaro's cards were good or how he was going to use them. It is unclear if this is part of Osiris' abilities or if it is because of D'Arby's mastery as a card dealer.