A summary of Jolyne Cujoh's history and movesets in video games. Jolyne makes her playable debut on the PS3 title. She was confirmed for the game along with Ermes, Josuke and Okuyasu. Most of her moveset involves utilizing Stone Free's ability to generate a multitude of medium-long ranged attacks.

As one of the mass majority of playable characters in the game with the "Stand" Style, Jolyne can turn Stone Free on/off in order to change movesets, and attack in conjunction with her Stand using the Stand Rush ability. Jolyne has 1000 HP.

ON GROUND
Jolyne can summon or recall her Stone Free, changing the way she plays.
Whatever it takes to win!

(Stand Off only) ON GROUND
Jolyne turns around and performs a downward reverse kick, before summoning Stone Free to do the same. The second hit by Stone Free knocks the opponent down. Jolyne's skills can be performed instantly following the first hit. (Comboable)
Stringing me for a ride!

(Stand On only) IN AIR OK
This skill can only be used in mid-air; Stone Free uses string to immediately pull Jolyne to the ground, forward, backward, or directly downward, allowing her to attack instantly upon landing. This move can be used to quickly get within melee range of the opponent, or evade anti-air attacks.
With my string!

(Stand On only) IN AIR OK ON GROUND
Jolyne and Stone Free shoot string upward, before pulling themselves up by the ceiling (regardless of whether or not the stage has a physical ceiling), forward, backward, or directly upward. This allows Jolyne to cover large amounts of ground or evade easier. This skill can be performed after jumping to further increase Jolyne's height. "Stringing me for a ride!" cannot be used in the same jump that this move is performed.
Special Moves (Stand Off)
Sweet dreams, creep!

ON GROUND
Jolyne summons Stone Free as the both of them rapidly kick in unison, the final hit sending the opponent flying. (Comboable through Puttsun Cancel)
The best angle to strike from!

(Hold to extend range) ON GROUND
Jolyne sends out a string along the ground. If the opponent touches it, Jolyne wraps them up before summoning Stone Free to pummel them, sending them flying. This is a low attack that cannot be blocked if the opponent is not crouching.
String Barrier

ON GROUND
Jolyne creates a wall of string as a trap that will damage the opponent if they come in contact with it, and nullify most projectiles. Jolyne is able to move through the barrier without disarming it. (Comboable)
Don't need strength to block with string.

ON GROUND
Jolyne hangs a string from her finger in front of her as a trigger. If the opponent hits her with a non-Throw/HHA/GHA, Jolyne will automatically Stylish Dodge, creating an opening for retaliation. If Heavy is inputted, the move is a feint and ends faster, with no string visible, allowing her to leave cautious opponents open to attack. (Comboable)
Special Moves (Stand On)
So you're the enemy, huh?

ON GROUND IN AIR OK
Stone Free rapidly punches the opponent. If Light is inputted, the attack sends the opponent flying. If Medium or Heavy is inputted, Stone Free augments its range by using string to extend its arms. This move can be charged to delay its release, and can can be used in mid-air to allow Stone Free to attack downward, with the Light variation being able to hit a downed opponent. A Stand Rush skill that Jolyne can disconnect from to attack the opponent while it is executing. (Comboable through Puttsun Cancel)
Don't wait, just attack!

ON GROUND
Stone Free sends a punch at an upward angle, augmenting its range by using string to extend its arm. If it connects, the opponent is knocked off their feet into the air. This move doubles as an anti-air, and has a follow-up.
I won't cut my string yet!
(during "Don't wait, just attack!")

ON GROUND
The airborne opponent is grabbed by the arm and swung downward, slamming into the ground.
Throw
I gotcha now!
2 ATK buttons at close range or

ON GROUND
Jolyne wraps her opponent up with her string, before Stone Free punches them away.
Heart Heat Attack / Great Heat Attack
A thousand hits!

+ 2 ATK Buttons ON GROUND
Jolyne's HHA, "A thousand hits!" (liberally recast as "Balls deep!" in the English localization), has her pull out a baseball, before Stone Free tightly wraps its string around it. Stone Free takes the ball and throws it, and if the opponent is hit, Stone Free will follow up by rapidly hitting them with the ball exactly 1,000 times (a reference to Miraschon's defeat).
Time for you to retire!

ON GROUND
Jolyne's GHA, "Time for you to retire!", has her throw out a fishnet-like net of string. If the opponent is caught, Jolyne tightens the net around them until they're completely wrapped up, before directly beating them a few times herself. Jolyne then summons Stone Free to pummel them with a rapid flurry of punches and kicks, ending with a single heavy punch that sends the opponent flying as the string unravels.

If Jolyne fights against Jotaro, Jotaro merely asks if she's a new Stand user (referencing the nature of Part 3 where Jotaro and his friends face off against countless Stand users sent to kill them on their journey to Egypt). In return, Jolyne shockingly questions about how he could have gotten so young. 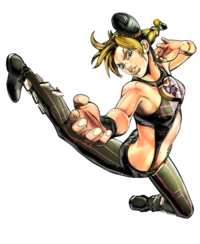 Jolyne was confirmed as a playable character for JoJo's Bizarre Adventure: Eyes of Heaven alongside Ermes, Pucci, and Weather Report.

As a Stand User, Jolyne is one of many characters with wildly varied abilities that grant her uniqueness in battle.

As with other Stone Ocean characters returning from All Star Battle (except Pucci), Jolyne's default and secondary alternate costumes swapped their places; her default costume in ASB is now her secondary costume and vice versa.

In the post-credits of the new JoJo timeline where most of the fallen allies are now alive and well, a younger Jolyne appears in the new Part 4 timeline, in a retelling of its first chapter where her father meets Koichi. In this new timeline, she is brought along by Jotaro to Morioh. While Jotaro is introducing himself to Koichi, asking about a Josuke Higashikata, Jolyne appears running to her father and interrupting the conversation to hug him. She is then advised by Jotaro to be careful crossing the street and to not stray too far away from him as she is still a child, or else her mother will be worried.

Jolyne appears as a support and help character. Her 2-Koma support summons her to use Stone Free's strings on every nearby opponent, stunning them. Her 3-Koma support is an "ORAORAORA!!!" rush by Stone Free. Her 1-Koma support boosts special gauge generation when health is low. Jolyne has an ally boost with Jotaro.