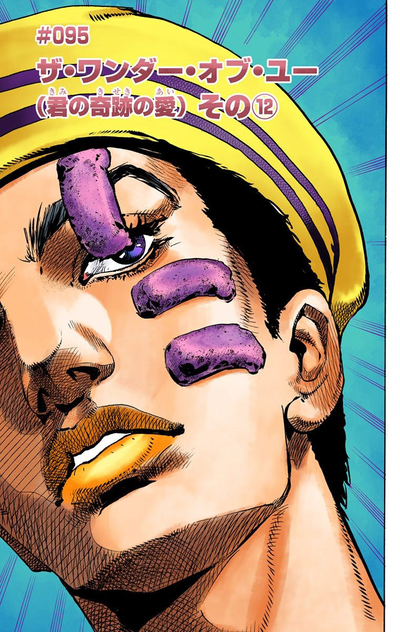 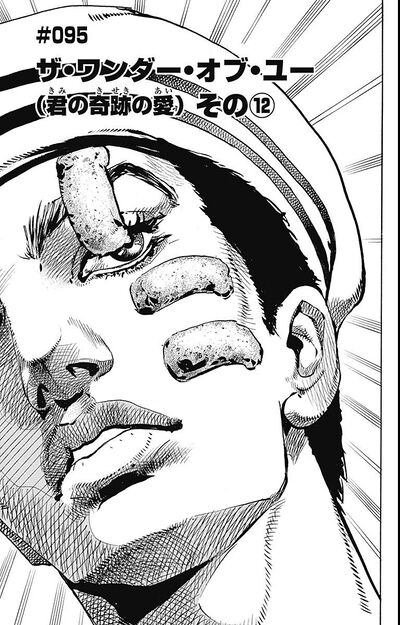 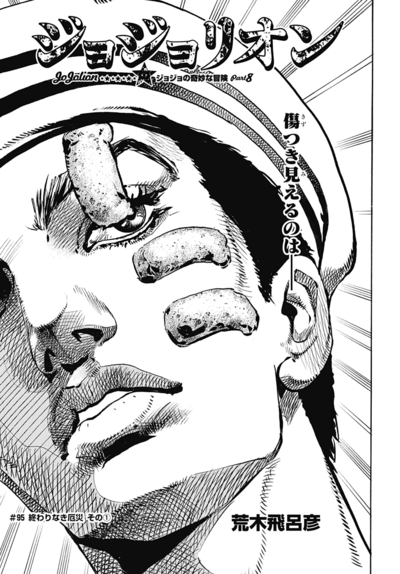 Due to Satoru Akefu's Stand, events have conspired to reveal the potted new Locacaca to the rest of the Higashikata Family, adding to the tally of recent disasters in Mitsuba's mind.

Norisuke enters Tsurugi's room with the rest of his children and sees Tsurugi, Mitsuba and Jobin letting Paisley Park drown in the toilet. Recognizing Yasuho's Stand, he rushes to pick up the phone and demands an explanation. While Yasuho pleads for Norisuke to move Paisley Park closer to the power outlet, Jobin attempts to explain his actions as the "right path" for Tsurugi's sake and asks Norisuke to put the phone back in the water. Outside the house, Yasuho is still incapacitated and sees the hospital director calmly waiting for events to unfold.

Back at the house, Jobin repeats his request as he mentions the family cannot let the Locacaca get stolen and reveals how he obtained the branch and grew the new fruits. He adds that the fruit will be the key to breaking the Higashikata Family's curse without the need to sacrifice anyone and that they are now too committed to this cause to let the news of their Locacaca leak to the outside. Norisuke acknowledges that he and his son have had complete opposite perspectives for a long time and even recognizes that he can be old-fashioned. If it is to cure the Rock Disease, Jobin could even be right and Norisuke would follow his son. However, Norisuke decides to see for himself if this path is the right one and investigates faint traces of a scent left on the fruits.

Norisuke summons King Nothing to visualize the origin of the unknown smell, resulting in an image of Ojiro Sasame carrying the flower pot outside. The whole family makes the connection between this and the news of Sasame and Maako Kitani's deaths by cerebral infarction. Tsurugi reacts badly to this revelation and his symptoms worsen considerably. Norisuke also notices Yasuho dying through the window. He turns around to face his son and asks Jobin what he did to Ojiro.

Jobin immediately touches Norisuke's neck with Speed King and asks his father for forgiveness as he commits to his own path. Now in tears, Jobin induces another heatstroke, taking Norisuke out. Norisuke drops the phone and Jobin cradles his father, overwhelmed by what he's just done. Likewise, the entire family is taken aback by Jobin's attack on Norisuke. Joshu, Hato and Daiya rush toward Norisuke but Jobin blocks their path with Speed King, menacingly reminding his siblings that they must prepare themselves and keep silent as the Higashikata Family is moving toward a new path. Jobin proceeds to take a tarp from the closet and covers Norisuke's body; announcing that the time of the harvest is at sundown, Jobin tries to claim that the family is winning.

However, when Jobin attempts to retrieve the phone in which Paisley Park was trapped, he discovers it displaced near the power outlet. Looking at his siblings, Jobin notices the positioning of Joshu's foot and the focus in his gaze. Paisley Park has returned to Yasuho, but she still suffers from grievous injuries and must call for help. Meanwhile, Satoru Akefu finally stands up. Once again, Mitsuba reminisces everything that has happened and calls the recent events a calamity that she suspects is a deliberate attack on the family.

Author's Note
“
I've been seeing a lot of people playing on the road this March. Football, playing catch, skateboards, etc. I like it personally.
”
—Hirohiko Araki
“
この3月は道路で遊ぶ人をよく見かけました。サッカーとかキャッチボールとかスケボーとか。僕は好き。
”
—Hirohiko Araki